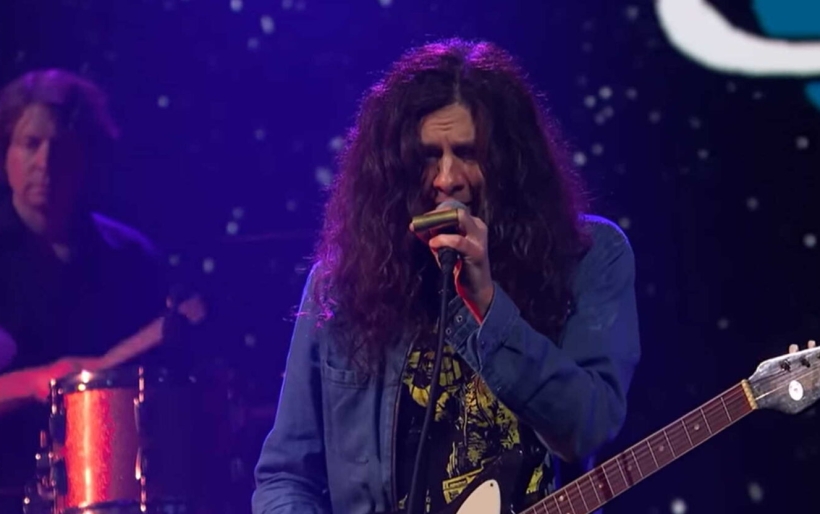 With shows along the east coast, Kurt Vile and the Violators will play Phantom Power on October 14, with a solo set at WXPN’s Free at Noon on June 17th.

Kurt Vile played two songs on the Colbert The Late Show with Stephen Colbert this week with announcements of new tour dates coming with the performance. Joined by his band the Violators, he performed a leisurely rendition of  “Mount Airy Hill (Way Gone)” from this year’s (watch my moves). Along with this, Vile did a solo rendition of the John Prine song “How Lucky”.

On the former, Vile picks an off-kilter slide guitar riff between the verses, singing of a surreal night with the backdrop of Philly neighborhood Mount Airy to set the scene. There is a very specific feeling felt with this rendition of the song; place yourself in the woods with your Walkman, taking a stroll to this song. It seems almost necessary to stroll and embody the Robert Crumb “Keep on Truckin” illustration.

The web exclusive performance of the John Prine song “How Lucky” is simple but demands your attention; Vile’s voice may not sound like Freddie Mercury but his timbre is a great match for this low-key tune, and the round tone of the classical guitar creates an intimate campfire performance feeling.

Adding to Vile’s summer tour plans, Vile and the Violators have announced a 15-date October tour supported by Julia Sharpiro for the first eleven dates and Come for the remaining four. Vile will be making a stop at Phantom Power in Millersville, PA on October 14, tickets are on sale now, more information can be found at the WXPN Concerts and Events page. If you want to catch him between now and then, Kurt Vile just announced a solo performance at WXPN’s Free at Noon concert series next week — RSVP here.