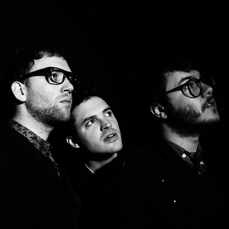 Audio for this feature is no longer available.
Bands are often described as coming "out of nowhere," as if they'd sprung into existence fully formed and hadn't spent years writing songs and polishing their collective voice and sound. The New York City quintet Caveman only entered the national consciousness last year, but its searching, dreamily rendered, deftly executed pop-rock is the stuff of painstaking craftsmanship and creative relentlessness.
Occasionally recalling a more languid incarnation of The Shins — singer Matthew Iwanusa often channels the sweet-voiced yearning of that band's James Mercer — Caveman smartly weaves in new-wave touches for shading, alongside hooks that linger without ever becoming overbearing. What Caveman's self-titled second album lacks in overt grabbiness, it gains in inviting, atmospheric warmth; this is a band that, only two albums into its career, already understands the art of the slow burn and the subtle build. Caveman is the epitome of a grower: a moody, cohesive, expansive set of songs that reveal their complexity, and unveil their surprises, quietly over time.
Copyright 2020 NPR. To see more, visit https://www.npr.org.