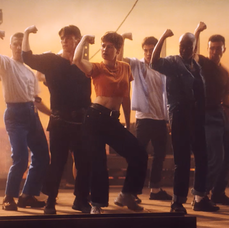 As the end of each month rolls around, NPR Music asks public radio DJs in 10 different states which songs they can't get out of their heads. The resulting playlist becomes Heavy Rotation, covering everything from local acts to international stars.
These recent releases— including French favorite Christine and the Queens and an appropriately spooky single from Thom Yorke — will have you reconsidering your 'Best of 2018' lists.

Christine and the Queens, "5 dollars"

French pop sensation Héloïse Letissier boldly pushes the boundaries of gender roles and sexual mores in her music. Originally recording as Christine and The Queens, she's shortened the moniker to Chris for her new album. The change suggests a more intimate relationship with her audience. "5 dollars" delivers on the promise. Songs about trading sex for money are rarely tender, but Chris reveals the vulnerability and humanity in the act. The song pulses on bass-driven rhythms layered with synth and piano, reminiscent of 1980s club hits. The vocals are delivered with heartbreaking sincerity and crystalline tones. Chris is a charismatic performer and her seductive, androgynous good looks play well in video. For "5 dollars" we are invited into her boudoir as she showers, preens and dons leather and tweed for a wild night on the town. —Rosemary Welsch, WYEP

In an uncertain present, there's comfort to be found in the past. The retro-leaning debut from Creamer effortlessly captures and revitalizes the sounds of '70s AM radio pop, delivering a sonic balm for the world-weary listener. Over wistful chords on the Wurlitzer, Philip Creamer flexes his three-and-a-half octave range, the achy harmony and high-flying chorus delivering a sing-along-with-the-windows-down kind of catharsis. Of course, the video's 'Dutch' TV presenter (producer Pat Sansone of Wilco and The Autumn Defense in a hilarious cameo) might imagine his audience clustered around console TVs in shag-carpeted living rooms. Some styles—mercifully—go out of fashion. But Creamer reminds us that others are timeless. —Micah Schweizer, Wyoming Public Radio

A safe haven for those who've lived through violence and hunger — that's what Sacramento rapper Mozzy prays for on "Thugz Mansion," his gospel-tinged rework of the Tupac original featuring Ty Dolla $ign and YG. Mozzy, a Northern California street rap stalwart, recently rose to national prominence after Kendrick Lamar shouted him out on the Grammys stage and featured him on the Black Panther soundtrack. West Coast rap fans who've followed him for years know that when it comes to making poetry out of the most trying experiences, Mozzy is that guy. The gravelly-voiced rapper offers solace to the wounded and isn't afraid to shed a few tears on wax himself. (You might, too, after you hear Ty Dolla $ign's heavenly bridge.) His "Thugz Mansion" is a call for justice in America's inner cities: No more death, poverty or unfair criminalization. —Nastia Voynovskaya, KQED

I am an IDLES addict. I cannot stop playing this IDLES album. It's like mainlining an uplifting and unifying assault on nationalism, racism, intolerance, and class inequality — all while maintaining an infectious positivity and message of self-love. A giant rowdy communal love fest! Rage never felt so good. I could have picked any song on the album, but for today, let's go with "Danny Nedelko," a rousing pro-immigration anthem named after one of the band's friends and Ukrainian immigrant. The song empathetically humanizes the issue: "He's made of bones, he's made of blood. He's made of flesh, he's made of love. He's made of you, he's made of me. Unity!" Joy as an Act of Resistance. is a brilliant rebellion! —Kevin Cole, KEXP

If you follow Rosanne Cash on social media, you know how passionately she speaks about our turbulent world. Her latest album, She Remembers Everything, brings us her most topical songwriting to date. Social concerns are built into her lyrics and compassion is at the forefront of her voice. The album's title track, co-written and sung with with Sam Phillips, describes a woman who's been broken by the times, exhausted and dazed, but is still aware and still singing her truth. Her sharp memory holds both a weariness and a threat; mirroring that, the song's gentle melody is bolstered by an undercurrent of dark bass guitar. Cash says in a press release, "I could not have written this 10 years ago — not even close. Time is shorter, I have more to say." —Rita Houston, WFUV

Her real name is Arleigh Kincheloe, but we know her best as Sister Sparrow, a slight, almost small, young woman with one of the biggest voices in rock music. She may be small in frame, but her voice is consistently powerful. If you've ever seen her perform, you know that the voice on the record is real. The name of the band, The Dirty Birds, is gone, but Arleigh's amazing songs remain, and that voice. In the song "Gold," she sings about her love life, and how she's a woman with "gold" love. The song is a bit of an ear worm, but in the best way possible. You won't mind singing this one all day long. — Chris Weink, WEXT

Luca Guadagnino's remake of 1970s Italian horror film Suspiria is already one of the most anticipated releases of the year. Add in a score by Thom Yorke and it's time to get hysterical. This is a pairing that's frighteningly good. "Suspirium," the first single from the soundtrack, uses unsettling lyrics and multilayered vocals to create a modern and turbulent lullaby that effortlessly channels the surrealism and sorrow of Dario Argento's cult classic, while purposely steering clear of any resemblance to the original score by the Italian prog rock band Goblin. Instead, Yorke focuses on perfecting the sound of an indefinite despair; the result is complicated and overwhelming, and another reminder that this is Thom Yorke's world and we're just living in it. —Stacy Buchanan, WGBH

Looking for further proof that rock and roll is very much alive? Look no further than Knoxville-based singer, songwriter and guitarist Briston Maroney. Maroney released a four song EP towards the end of 2017, and is off to a strong start this year with three new songs as he works towards his debut full length release in 2019. Maroney comes from a family of musicians, and in 2014, when he was 16 years old, he was a semi-finalist in American Idol Season XIII. "I've Been Waiting" is a propulsive, melodic rock song that nicely captures Maroney's singing and songwriting strengths. Vocally, he has a raw, soulful and often emotionally vulnerable tone, at times sounding a bit like Nathan Willett, the lead singer of Cold War Kids. Maroney has an arresting musical vibe that's both rocking and invigorating, and "I've Been Waiting" gallops out of the gate with charm and vision. —Bruce Warren, WXPN

12 Little Spells, the intricately detailed new album by Esperanza Spalding, comes by its title honestly. Not that Spalding, the irresistibly self-assured singer-songwriter, bassist and all-purpose dynamo, has any intention of showing her hand. The songs, which she unveiled one at a time on social media, are complex, digressive and allusive. Some require a little time to grasp.
But then there's "Thang," an exhortation that puts it all out there. "You best belie-ee-eve you came in with a real thing," Spalding sings breezily, over a hum of organ and finger picked acoustic guitar. "Your own / Gait and way of walking in this simulated world." The tune proceeds along a soulful path, with slow-moving chromatic harmony that might remind you of Maurice White's ballad juju for Earth, Wind & Fire. The music is circuitous but sensuous, and the message as clear as Shakespeare's "To thine own self be true." Though Spalding adds some personal spin: "And you glide in step with your own mess." —Nate Chinen, WBGO

Matthew Dear's voice — resonant, syrupy, minimal — has hooked me since first hearing his music. So when "Bad Ones" opens with the spritely vocals of Tegan and Sara Quin why does it fit so perfectly? Released as a single last year, the song was a herald of sunnier things to come. You'll still find the Dear signatures: A bass line that's almost easier to feel than hear and his dark, staccato charm. "Bad Ones" is nimble song too. "Bad Ones" is a party jam perfect for slow dancing. The track's narration joyfully calls you out for liking something playfully salacious and the music is impossibly catchy. After months of repeat listens, I can't wait to hear it again. —Nick Brunner, Capital Radio's Hey, Listen!