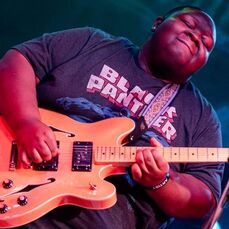 The May 2019 edition features a fresh lineup of artists celebrating their roots. NPR member stations compiled a list of best songs that have been playing on repeat on public radio stations around the country including sounds of the Appalachian mountainside from Ani DiFranco, a re-imagining of low country music from the Carolina's by Rhiannon Giddens and other hidden gems that are perfect for the summer.
All songs from this month's Heavy Rotation are available to stream on the Heavy Rotation Spotify playlist at the bottom of this page. — Maya Eaglin

I've heard not one but two big voices in 2019. First there was Yola (who had me at "Faraway Look") and now, Nicole Bus, a soul singer from Holland of all places. In fact, she was a quarter-finalist on the Dutch version of The Voice.
The song is "You." When she hits the chorus, "I'm free as a bird," the power and positivity of her voice takes my breath away. The song borrows a lyric from "As Long As I've Got You" by The Charmells with a gorgeous piano sample and beats from Wu-Tang Clan's "C.R.E.A.M." She transforms it into a soul anthem equal parts affirmation, nostalgia and uplift. Specifically, the song pays tribute to black men. As Bus has said in an interview, "In the heavy times we're going through right now, we don't have an encouraging song about the beauty, strength and intelligence of our black men. I decided to write one." - Anne Litt, KCRW

Drawing on the long tradition of Appalachian progressivism, Rising Appalachia vocalists Leah Song and Chloe Smith joined forces with Ani DiFranco for this song that seeks to wrest the Southern mountains from what's becoming a "plastic empire."
Lyrically, the song unleashes a laundry list of issues that have turned the region into a caricature of itself, overshadowing the area's natural beauty and human ingenuity: "Minimum wages, maximum security, simple pleasure traded for business and authority." All of this is backed by a trotting drum and upright bass groove, the sawing fiddle that sits at the heart of all Appalachian music. "Speak Out" is a vocal three-part harmony jam of reclamation and likely one of the timeliest, danceable earworms this summer. - Kim Ruehl, Folk Alley

Rhiannon Giddens, "I'm On My Way"

It's hard to overstate how revolutionary the Carolina Chocolate Drops were when the group first started playing coffee shops and festivals around North Carolina. Rhiannon Giddens, Dom Flemons and Justin Robinson shook the world of traditional music right down to its roots. In the years since, Giddens has carved out a place for herself as one of the leading American(a) voices.
On her third solo record There Is No Other she pushes further down her own path while carrying traditions learned from mentors like Joe Thompson. The song "I'm On My Way" is the first single and it opens with claw hammer banjo, back beat and raging fiddle that will shake you to your core. But it's her voice that rises above all else. Rhiannon sings. "Don't know where I'm going / But I know what to do" as if to tell us to come along, trust her. She's ready to let the music take us all somewhere new. We're on board. - David Brower, WUNC

With its prolific output of music, it's hard to keep up with Australian psychedelic rockers King Gizzard & the Lizard Wizard. While the members have been releasing records since 2011, with each passing year their artistic output exponentially increases. The group released 14 albums in seven years, with a staggering five albums in 2017. Think about the band like this: Take Phish, Tame Impala, Frank Zappa, and then add a heaping dose of singles from the Nuggets box set and you've only just begun to touch on the brilliance of this band musical virtuosity. Fishing For Fishies is a socially conscious boogie album about the environment and the overuse of technology. One of three "boogie" titled songs – "Boogieman Sam" - is a harmonica driven, boogie-blues jamming shuffle of bizarro world classic rock. - Bruce Warren, WXPN

Christone "Kingfish" Ingram sings and plays like a man who's sung the blues all his live-long days. The twist is Ingram's whole life is a mere two decades in length. That makes his collaboration with Buddy Guy all the sweeter. The legendary Chicago musician, at 82, is considered one of the last great bluesmen of his generation. Getting a chance to work with this Mississippi prodigy has to give Guy hope for the future of his genre. The two musicians match sweet guitar riffs that swoop and ripple with precise fingering. Their vocals match effortlessly, defying the age difference between them. Lyrically the song is full of classic tongue-in-cheek metaphors that match voids in the stomach to the empty chambers of a love starved heart. - Rosemary Welsch, WYEP

When the multi-instrumentalist nephew of David Letterman's former Late Night guitarist decides to front his own band, you know it's gonna be good. Trey Privott formed Austin combo Los Coast four years ago and now that they're playing as a quintet, they've become a local mainstay of psych-pop gospel-funk soul-filled fun. Privott's slick Sam Cooke-esque vocals may be at the helm of Los Coast, but their genre-fusing energy is thanks in no small part to co-founder and arranger John Courtney, who cites just as much influence from jazz as from Jerry Garcia. You might not be able to slap an evergreen label on their sound, but the five-piece will certainly get your heart rate up and set your booty for "shake" in no time. It's about be high tide for the members of Los Coast, who drops their debut album, Samsara, on June 14 in the midst of a two-month national tour. - Jack Anderson, KUTX

Whatever summer-time memories you can fondly conjure up, it's likely they can be revisited in your mind while Ona's song "Summer Candy" provides a suitably hazy soundtrack. Here in the indie-rock quintet's home state of West Virginia, the long days and warm nights are often filled with swimming holes, pitching horseshoes and home-town baseball games. No matter what you're planning for the dog days, "Summer Candy" will fit on your summer playlist.
As the first guitar tones creep in like the tartness of a lemon-drop, the groove is propelled by a tasty, salt water taffy-like bass line, while the keyboards warmly flicker like the streetlights that once signaled when it was time to make your way home. After multiple playbacks, you'll find yourself anticipating the punctuated handclaps like a letter in the mailbox from your summer camp pen pal. - Adam Harris, Mountain Stage

Kelli Mayo was feeling overwhelmingly self-conscious and scared to make a decision of any kind. So when it came time to write new music, she wanted to keep things simple with an uncomplicated song structure and abstract lyrics. To gather inspiration, she and Skating Polly bandmates/siblings Peyton Bighorse and Kurtis Mayo made a diverse playlist of songs about having a good time, including "Fight For Your Right" by Beastie Boys, "Rocka Rolla" by Judas Priest and "Bluebird Wine" by Rodney Crowell.
The result is "Play House," a rip-roaring grunge-pop song with playful lyrics about a wild night with friends. It's carried by a buzzy, vibrating bass riff and closely paired harmonies, while accented by Kelli's occasional frenetic screams.
Put "Play House" onto your good times playlist and see how it stacks up. — Ryan LaCroix, KOSU

The members of Seattle band Tacocat call themselves feminist pop punk. But the quartet's latest album, This Mess Is a Place, finds it venturing further into the bubblegum, new wave territory pioneered by the B-52's. The video for "Grains of Salt," with its acid neon colors and lip-syncing drag queens, taps into the same Pee-wee's Playhouse surrealism as "Love Shack" and "Roam." But lead singer Emily Nokes puts her own millennial spin on the concept – sighing advice like "Try not to bother / the world is offensive." That collision of summer jam vibes and political resistance is making "Grain of Salt" a staple at KDHX. - KE Luther, KDHX

This large scale Ska band out of Tokyo has embraced all the great things about Ska music--big horns, big beats and catchy lyrics. TSPO also have the moves and the outfits that pays homage to the early days of Two-Tone Ska (as in The Specials or Madness.) While most of its songs are sung in Japanese, on "This Challenger," the members sing in English. It's a song about trying to win a girl back from another boy. It's just a quick, fun, get-off-your-feet and dance type of track that will stay in your head long after it ends. — Ian Stewart/The World Music Show on WCVE