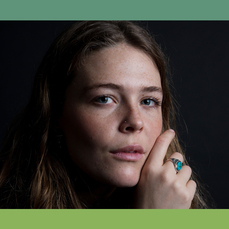 To celebrate the end of 2019, we are publishing a special edition of Heavy Rotation – our popular, monthly series that features songs public radio can't stop playing. This list of songs is ranked in order, using spin counts compiled from our various member stations across the country. Here are the most popular thirty songs from another music-filled year in public radio.
You can stream this playlist via Spotify or Apple Music.

28. Mavis Staples, "Change"
Mavis Staples may have created the perfect protest song. "Change" is the kind of tune that inspires listeners no matter what their beliefs are. Ben Harper's powerful guitar and equally powerful lyrics help make this an instant anthem for today's turbulent times. — Benji McPhail, The Colorado Sound

27. Lizzo, "Juice"
With "Juice," Lizzo took a carton of life's lemons — of self-doubt, self-consciousness, self-hatred — and served up 2019's anthemic beverage of confidence, acceptance and respect. The break-out song came at a time when America desparately needed freshly-squeezed "Juice," not with Vitamin C, but with Vitamin L: love, light and Lizzo. — Joni Deutsch, WFAE Amplifier

26. Beck, "Saw Lightning"
Reminiscent of the acoustic guitar sounds found on Beck's breakthrough album, Mellow Gold, the intro to "Saw Lightning" transitions into a groove that is more in-line with the beat-driven songs from his 2017 album, Colors. With the help of Pharrell Williams, Beck has produced an auditory time capsule of a career that spans more than 25 years, while continuing to push musical boundaries as a creative visionary. — Amy Miller, KXT

25. Beirut, "Landslide"
Zach Condon paid for a dusty old Farfisa organ with the money earned from his first job. Condon managed to coax songs out this broken organ, which once belonged to a traveling circus, including those on Beirut's debut album and all of the songs on their second recording. Years later, Condon finally shipped it to his home in New York. By winter 2016, his Farfisa was back in action and was the founding principle for Gallipoli. "Landslide" is your takeaway. — Ariana Morgenstern, KCRW

23. The Lumineers, "Gloria"
The Lumineers are consistently in the pocket, crafting signature folk rock songs seemingly without effort. "Gloria," from III, is jubilant and tuneful, continuing the band's astonishing ascent, which started with The Lumineers' first release in 2012. — Jessie Scott, WMOT

22. Florence + The Machine, "Moderation"
Love is many things: patient, blind ... a battlefield. It isn't moderate. Especially not when it comes to Florence Welch. In the single "Moderation," she's a Victorian ghost haunting you with wails of lamentable and consuming love. A level-setting love song about getting what you deserve. — Jade, The Current

21. Jenny Lewis, "Red Bull & Hennessy"
Desire, longing, lust, desperation, rejection, repulsion, getting high and holding on to love when the spark is gone (whew!) are all wrapped up in the buoyant "Red Bull & Hennessy" from On the Line, Jenny Lewis' masterful album about being open to learning life's lessons. — Kevin Cole, KEXP

20. Andrew Bird, "Sisyphus"
There are plenty of songs out there about loss, but this one celebrates having the power and bravery to walk away. Andrew Bird is telling us how to fail (in a good way), and he sounds amazing doing it. — Maureen Malloy, WRTI

18. Karen O & Danger Mouse, "Turn The Light"
Karen O and Danger Mouse's Lux Prima is meant to wash over our senses as a wave of dreams. It's meant to be listened to and taken as a whole, greater than the sum of its parts. "Turn The Light" may be the most accessible song on Lux Prima, but it is a crucial linchpin in the sweeping, cinematic story. — Anne Litt, KCRW

17. Adia Victoria, "Different Kind of Love"
She calls her music "gothic blues." The gothic is obvious, with lyrics that conjure the darker aspects of human nature, but her approach to the blues comes from a historical perspective. The blues has been a haven for black women's voices and it is through this lens that Adia Victoria spins her tales of life's struggles. — Rosemary Welsch, WYEP

16. Jay Som, "Superbike"
Melina Duterte is an adventure guide. You can feel yourself riding a motorcycle at 80 miles per hour out of Oakland in the dead of night. The imagery is paired with even more brilliant guitar choices. Two acoustics mixed with a Telecaster? Cosmic, and the indication that Jay Som could be a major force in production in the near future. — Phil Jones, WERS

15. Sturgill Simposon, "Sing Along"
The restrictions of genre can be a prison to a true artist. Sturgill Simpson's Sound & Fury is a jailbreak of an album and, along with the full-length companion anime, serves notice that Simpson is far more interested in his art than the expectations of the establishment. — Jon Hart, The Bridge

13. Guster, "Overexcited"
Even in unsettled times, Guster does a great job using the widespread appeal of the band's music to drum up a carefree vigor that will help keep your spirits high. — Stacy Buchanan, WGBH

12. Cage The Elephant, "Ready To Let Go"
It's always a drag when a writer has to experience firsthand loss, death and divorce to focus their songwriting. But that feeling of disconnection is what Matt Shultz draws from for "Ready To Let Go." The song says a lot about the state of mind of someone questioning everything after major life changes and really, who can't relate? — Mary Lucia, The Current

11. Local Natives, "When Am I Gonna Lose You"
It's alarming how good this group is at being wildly emotional and a fun, vibe-y summer band. The highlight of the song is the bridge when, at the height of anxiety about his assurance of failure, our narrator falls deeply in love. Somehow, he feels he's not worthy of it; and yet, he is able to describe his loved one and the exact moment he falls in love so beautifully, all in a 15-second phrase. — Cindy Howes, WERS

10. The Head and the Heart, "Missed Connection"
The Head and the Heart specializes in writing about relationships — from friendship, to loathing and everything in-between. The band has dozens of songs worth putting your beliefs into, singing along with and messaging to a friend. "Missed Connections" wraps that spirit in precise, heartfelt harmonies; they find the words when we can't. — Rita Houston, WFUV

9. The Black Keys, "Go"
The Black Keys nailed it again with "Go." It's a classic idea: hitting the road for new horizons with a driving back beat and a snarly guitar. It should join the ranks of great, inspirational power pop anthems like "American Girl" and "Don't Stop Believin'." — Dave Jackson, Jefferson Public Radio

7. The New Pornographers, "Falling Down The Stairs of Your Smile"
Close to 20 years since the band's debut, The New Pornographers returned with a smartly crafted, power pop-influenced song heavy on the grooves, synths and charming harmonies of A.C. Newman and Neko Case. — Bruce Warren, WXPN

6. Sharon Van Etten, "Seventeen"
With "Seventeen," Sharon Van Etten has created a coming-of-age song for "grown ups," observing the actual process that every person over 30 didn't know they needed. She captures the beautifully complex emotions and compulsory projection that witnessing the pure potential of youth stirs—nostalgia, hope, regret and the bittersweet realization that no amount of preparation will stop those young'uns from making the same mistakes we did. — Jessi Whitten, Colorado Public Radio

5. Jade Bird, "I Get No Joy"
Jade Bird is a constantly moving ball of positive energy, self-deprecation and infectious laughter. When she performs, she leaves absolutely nothing on the table. "I Get No Joy" wraps her ebullient spirit in a hard-driving refrain that's easy to love and hard to forget. — Eric Teel, Jefferson Public Radio

4. The National, "You Had Your Soul With You"
For two decades, no band has chronicled the intersection of love and loss better than The National. And while lyrically this song mines familiar territory, the group's signature melancholic sound is almost gone. In its place are bright, flickering lights and a gorgeous vocal contribution from Gail Ann Dorsey. — Jerad Walker, opbmusic

3. Vampire Weekend, "This Life"
Father Of The Bride is an album with no shortage of songs worthy of airplay but "This Life," written by Ezra Koenig, Mark Ronson and iLoveMakonnen, was as irresistible as any single of 2019. With handclaps, a jaunty guitar line and Danielle Haim's backing vocals, suffering has never been this appealing. — Eric Holland, WFUV

2. The Black Keys, "Lo/Hi"
The melding of low and high — fidelity, complexity and vibe — has always defined the sound of The Black Keys. On "Lo/Hi," Dan Auerbach and Patrick Carney give new meaning to their classic aesthetic. — Jim McGuinn, The Current

1. Brittany Howard, "Stay High"
Alabama Shakes frontwoman Brittany Howard is no stranger to side projects — from her release as Thunderbitch to the collaborative Bermuda Triangle — but her most daring and vulnerable work yet comes in the form of her debut solo album, Jaime. In the dreamy single "Stay High," Howard's singular voice crafts vignettes of working class life in her Alabama hometown. With help from jazz keyboardist Robert Glasper on the celesta, the retro-soul stunner is one of the year's best feel-good tunes with no shortage of depth. — Desiré Moses, WNRN
Copyright 2021 NPR. To see more, visit https://www.npr.org.