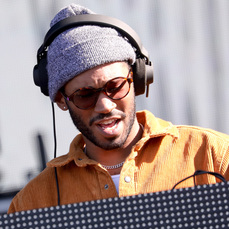 This month's installment of Heavy Rotation is full of some of January's most exciting releases and collaborations, hand-picked by NPR Public Radio Member Stations. Revive your playlists with this new mix of everything from effervescent, sticky-sweet pop to homegrown blends of soul and psych-funk.
All songs from this month's Heavy Rotation are available to stream on Apple Music, or on the Heavy Rotation Spotify playlist at the bottom of this page.

"Say So" by Doja Cat is the perfect pop song. It gives retro vibes that inspire roller-skate and Walkman daydreams (for us old folks). For the kids today, it inspires TikTok dance parties. The viral track, off Doja Cat's sophomore album Hot Pink, has a quintessential sticky hook — but pay close attention because you could be caught singing the wrong lyrics. —Silvia Rivera, Vocalo

The compositions of Wayne Shorter have an almost infinite life. They are a constant source of reinvention, appearing on albums by Branford Marsalis, Harold Mabern, Gregory Porter — and now, the Jazz at Lincoln Center Orchestra with Wynton Marsalis. His songs are featured in a double CD of 10 Shorter stories, each arranged by a different JALC member. "Endangered Species," arranged by trombonist Vincent Gardner, moves from its original mid-'80s funk setting to a big band stop-time start. The next section comes in shouting, spirited and layered, anchored by a piano sent from church, with Shorter's splashing soprano saxophone and Ali Jackson's drum engine gassing this trip through Wayne's domain. —Gary Walker, WBGO

Featuring the vocals of fellow Canadian singer Charlotte Day Wilson, "What You Need," is not a slow burn, but rather an instant fire, immediately arresting listeners' attention with an infectious groove that is equal parts magnetic and unrelenting. The dueling hi-hats and various percussive aspects make this track a hypnotic polyrhythmic ditty, but it's the additional synth and orchestral symphonic elements combined with Wilson's dreamy vocals that graduate this tune to future-classic status. If BUBBA is an album that takes Kaytranada's musical profile to the next-level, "What You Need" may be one of the major reasons why. —Chris Campbell, WDET's The Progressive Underground

"Texas Sun" is the product of two of the Lone Star State's brightest — soul singer Leon Bridges and instrumental psych-funk band Khruangbin — combining forces. It's a perfect pairing and the rare instance in which a collaboration truly sounds like equal parts of its creators. Bridges mellow vocals seamlessly blend with Khruangbin's rootsy and cinematic instrumentation. "We try not to have too much of an intention, because it gets in the way of what the music wants to do," says Khruangbin's Laura Lee. "If you just let the music do what it's supposed to do, it will reveal itself." What's revealed here is the soundtrack to a late afternoon drive across Texas that should come packaged with a Topo Chico. —Brian Burns, WUNC Music

The Grateful Dead comparisons come easy with this new song from California's Mapache. "Life On Fire," from the band's upcoming full-length album, From Liberty Street, has a charmingly loose-yet-deliberate groove, so strong you can basically hear the sunshine. Slinky guitar strumming couples with percolating hand percussion to conjure a floating feeling, like looking down on the canyons of California. If you close your eyes, your face will start to warm with the feeling of a western breeze, which can only help if you're currently enduring one of winter's cold spells. —Adam Harris, Mountain Stage

Samantha Crain's upcoming album, A Small Death, represents a musical rebirth. Multiple car accidents left the Oklahoma indie folk musician with debilitating injuries to her hands and subsequent mental anguish. "An Echo" marks Crain's emergence from that period of trauma, as she burns off the dead wood of the past few years. The deliberate, mournful song evokes all the feelings about complicated relationships that we sometimes push way down. With lines like "Somehow between us / The air became so thick we couldn't breathe," the Choctaw singer takes listeners on an emotional journey. The song slowly builds on sparse instrumentation, with a pedal steel weeping throughout. A somber clarinet sets the tone of the final verse, as we come to the realization that sometimes things are just difficult. Even so, the way Crain forcefully wails the line "You don't even need to look me in the eye" shows that pain still remains. —Ryan LaCroix, KOSU

One of the biggest rock bands in the world, Tame Impala, are readying the release of their new record, The Slow Rush, due out on Valentine's Day. The latest song to be unveiled, "Lost In Yesterday," showcases everything we love about the Australian psych-rockers. Musically, "Lost In Yesterday" finds itself wrapped in '70s influences, and there's definitely a disco vibe here. Kevin Parker explores nostalgia and the positives of looking forward all upon a bed of hypnotic grooves and an overall vibrant musical landscape. —Mike Vasilikos, WXPN

The Lagoons, "Give It Up For Love"

The Selan brothers may have shed a bit of their West Coast character by moving to Austin, Texas, but in that process, The Lagoons have kept their cool and continue to make a splash right here on the Third Coast. The Lagoons share production and vocal duties; with Joey on keys and sax, and Ryan on guitar, drums and bass, this retro-minded duo builds a reef of laid-back jazz chords, moody harmonies, soft rock and chill-wave (not unlike the band's L.A. "daytime disco" counterpart, Poolside). Stick at least ankle-deep with The Lagoons in 2020, whose new LP is on the way. —Jack Anderson, KUXT

The Secret Sisters have been through a lot in the past few years, and their forthcoming album, Saturn Return, is rife with honesty and raw emotion. Early highlight "Cabin" is riddled with anger and fear — and the isolation that comes with it, — all threaded together in this beautifully harmonized song. In the hands of producer Brandi Carlile, master of artful dynamics, "Cabin" builds and builds until the electric guitar drops like a lit match. This is what it sounds like when two sisters hold each other through life's hardest moments and come out the other end singing. —Kim Ruehl, Folk Alley

With her latest album Songs For You, Tinashe has finally completed her evolution into R&B's Carly Rae Jepsen. Liberated by her split from the major label that badly mangled her career, she casually stacks the record with effervescent club jams. Chief among them is "Perfect Crime," a rollerskating throwback so deliriously weightless that it takes a few spins for the gravity of the lyrics to sink in. There's dancing, yes, but there's also blood and betrayal. Even Tinashe's bubblegum is served with a heavy helping of remorse. —Evan Rytlewski, Radio Milwaukee