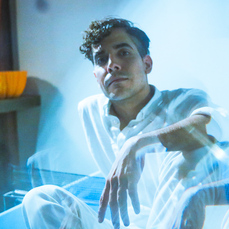 Every month, we ask radio stations around the country one critical question: What's the one song you can't stop listening to? March's lineup brings you a comeback track from The Strokes, a jazz-tinged rendition of "Jolene," a new tune from the ever-innovative Thundercat and more.
All songs from this month's Heavy Rotation are available to stream on Apple Music and the Spotify playlist at the bottom of this page.

Actor, filmmaker, writer and musician Donald Glover's fourth Childish Gambino record, 3.15.20, is a challenging, genre-defying and rewarding depth probe. It's a dense album, sonically and conceptually, as songs shape-shift with experiments in sounds and textures while addressing topics like self-love, climate change, parenting and injustice. Part Prince, part Earth, Wind & Fire,"19.10" might be the most straight-ahead song, but don't let the funk workout fool you: It's not a party jam, but a father sharing wisdom with his son, preparing him for the harsh realities in life that lay ahead. —Kevin Cole, KEXP

"Shangri-La" from Ed O'Brien, who performs under the name EOB, was inspired by the Brazilian festival Carnaval, but the beginning of the music on his new album, Earth, was far simpler. O'Brien gave his Radiohead bandmates of 35 years notice that he needed time away to have an extraordinary experience with his family. They moved to rural Brazil on the edge of the rainforest with no cell phones and no internet — just family, music and food. That's where O'Brien began writing on his acoustic guitar. Earth is a celebration of the important things in life. It comes at exactly the right time. —Jon Hart, The Bridge

Inspired by his friend's tendency to shelter in place before it was considered cool or even mandated, "Here They Come" is Hamilton Leithauser's way of checking in via song. His new album, The Loves Of Your Life, out April 10, is comprised of songs inspired by a cast of individuals in his life, including several who make cameos in new promo and music videos: Maggie Rogers in a promo for "Isabella," and "Don't Check The Score" with Sienna Miller. But it's actor Ethan Hawke who provides the slapstick relief in "Here They Come" as Leithauser's impatient friend; his volatile reaction to the song explodes into a kerfuffle at the Café Carlyle. —Gini Mascorro, KXT

My Sister, My Brother, "Nothing Without You"

Let's take a minute in this new normal to celebrate the beauty of the human voice lifted up in harmony. These three talented and accomplished artists make magic. When the tornadoes blew through Nashville in early March, we had My Sister, My Brother booked for WMOT's now-suspended lunchtime Friday event. Peter Groenwald, Sean McConnell and Garrison Starr performed "Nothing Without You," and not only were our eyes welling up, but the band teared up on stage as well. The song is from the group's self-titled EP; it is a prayer, a promise, and a song for this extraordinary moment. —Jessie Scott, WMOT

Glo-fi. Chillwave. Hypnagogic pop. Oddball genre labels aside, Neon Indian's Alan Palomo has an incredible knack for providing funky and upbeat electronic sounds perfect for any siesta or daytime disco. Palomo has continued to push Neon Indian's style with psychedelic effects and production, while not overcomplicating time-tested electronic music formulas (something Palomo had fully committed to with his solo project, VEGA, before merging with the live band). Late last year, Neon Indian released its first single in four years, putting Palomo's Mexican American multiculturalism and politically-charged humor front and center, something we hope to hear more of in the near future. —Jack Anderson, KUTX

Last December, when Pretenders lead singer and guitarist Chrissie Hynde did an interview with World Cafe host Raina Douris about Hynde's solo record, Valve Bone Woe, she told Douris that a new Pretenders album was done, and it would be out sometime in May of this year. That promise has been fulfilled with the arrival of "The Buzz," the first new song from Hate For Sale, out May 1. The song, about a love affair and the addictive feeling you get when it hits, "The Buzz" is an instant classic Pretenders song, with Hynde's commanding voice right up front amidst a sea of soaring guitars. —Bruce Warren, WXPN

Most people wouldn't lump jazz and country together, but that didn't stop Sara Gazarek. A musician without borders, Sara can take music from any genre and make it stunningly her own, including Dolly Parton's "Jolene." The urgency of the piano and drum ostinato create the perfect tension for Sara to break through and beg Jolene not to "take her man." This emotional tension is present throughout her self-produced, Grammy-nominated album Thirsty Ghost. Listening to Thirsty Ghost is like reading a good book: You can't stop until you've heard every single song. —Stephanie Steele, KBYI

The influence of Billy Idol's "Dancing With Myself" is heard throughout the upbeat new single from The Strokes. Upon the guitar intro of "Bad Decisions," there are rhythmically similar notes that shine through this thrilling '80s-inspired song that will appear on their first new album in seven years, the aptly titled The New Abnormal. Blending in the band's trademark garage rock sound, this fun comeback track is reminiscent of what has always made it great — exciting guitars, drums and catchy hooks. Not to worry: Idol received a songwriting credit. —Alisha Sweeney, Colorado Public Radio

Here in the Mountain Stage office, we've long shared a mutual love for the unmatched innovator Thundercat. We were understandably excited when a press release for his latest single, "Fair Chance," arrived in our inbox, and instead of cranking the tune in our office, quarantine efforts meant we had to reply-all with our thoughts.
"Thundercat is the hero we need right now," was my first thought. Associate Producer Vasilia Scouras said there was a toddler dance party in the living room while she listened. Our Assistant Producer John Inghram, himself a bassist and unabashed Thundercat fan, took a break from home-schooling his two boys to summarize, astutely, that "it's like Stanley Clarke and Jaco Pastorius had a love child, then let Sailor Moon and Michael Jackson raise it in the streets of LA. With tutoring by Basquiat. Big fan."
So, when It Is What It Is drops on April 3, the Mountain Stage team will no doubt still be socially distant; but hopefully enjoying the music together, even though we're apart, will help make that distance seem a little closer. —Adam Harris, West Virginia Public Broadcasting

On her new album Saint Cloud, songwriter Katie Crutchfield of Waxahatchee has largely abandoned the '90s-inspired soft/loud guitar rock that defined much of her band's recent work. "Lilacs" sounds more like Lucinda Williams than Pixies, with the Alabama-born singer proudly leaning into her Southern drawl and showcasing her confident lyric writing. "And the lilacs drank the water, and the lilacs die / And the lilacs drank the water, marking the slow, slow / Slow passing of time," she sings here, hopefully serving as a reminder to all of us that even in these scary and turbulent times, beautiful constants remain. —Jerad Walker, opbmusic

Nashville's Abigail Washburn and Beijing's Wu Fei are perfectly matched in their interpretation of this Chinese folk song. The clawhammer banjo and guzheng may seem odd bedfellows, but their percussive zeal here provides an almost cinematic accompaniment to a song about the excitement of new love. The singers trade lines in English and Chinese, galloping through the narrative like a pair of young girls riding bareback toward their beaus. Washburn and Wu have been collaborating for years onstage across both the US and China, but this is their first duo recording, and it's well worth the wait. —Kim Ruehl, Folk Alley