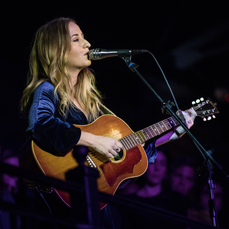 Margo Price sings classic country songs that manage to enchant, even as they disillusion. Her steadfast voice and songwriting conjure a powerful sense of nostalgia — she emerged in 2016 with Midwest Farmer's Daughter, an album that didn't so much callback to '70s country as it did flawlessly reanimate it. But if her musical signifiers are comfortably familiar, her lyrics stand in stark opposition to that feeling. They don't live in a soft-focus past, but are eyes-wide-open to modern America — from songs like "Pay Gap" to "All American Made," Margo Price brings a fresh urgency to a well-worn form.
Standing on the 9:30 Club balcony with a scratched old acoustic guitar, she appeared as a kind of troubadour. She paraphrased Sam Cooke — "A voice should not be judged on whether it's beautiful or not, it should be judged on [whether it] can convince you that [it is] telling the truth." Price's project could easily settle for nostalgia. But her voice and the songs she sings carry the good of tradition, along with a clear, contemporary ring of truth.