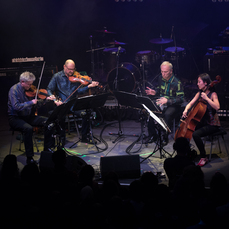 Collaboration. It's at the heart of many of NPR Music's finest moments. And it's in the DNA of the intrepid Kronos Quartet, which some 40 years ago began working with composers around the globe to spotlight new music.
Opening our 10th anniversary concert at the 9:30 Club in Washington, D.C., Kronos, true to form, gave an appreciative audience both a world premiere and an extraordinary surprise collaboration.
The band began its set with a soulful rendition of "House of the Rising Sun," in which lead violinist David Harrington belted out like a blues singer. Then, in a hair-raising arrangement by Jacob Garchik, music by the young Egyptian electro-folk artist Islam Chipsy ricocheted in frenetic waves.
Written for Kronos' open access education initiative Fifty for the Future and called "Zaghlala," the piece had not been heard by any audience anywhere. The music refers to blurred vision caused by strong light hitting the eyes. Kronos' violist Hank Dutt drove the pulsating beat, swapping his viola for the Middle Eastern dumbek. Kronos also conjured up Gershwin's "Summertime," inspired, Harrington noted, by Janis Joplin's mesmerizing version.
Finally, at the end, came the Wilco moment.
Harrington announced the last tune, "Born Alone," as belonging to one of the group's favorite bands — Wilco. As the strings fired up a brand new arrangement, created for this event, Jeff Tweedy himself emerged from back stage to sing his song.
It was a stunning collaborative moment. All genre pigeonholes seemed to fall away as these artists of singular purpose converged.