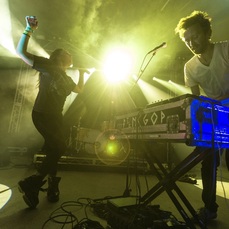 "We're gonna play a whole bunch of new songs for you," said Amelia Meath as she introduced her electro-pop duo Sylvan Esso, adding, "because we're tired of playing the old ones."
The phrase "we're gonna play new songs" often elicits groans from the crowd. But for Sylvan Esso — whose second album, What Now, comes out April 28 — the promise of new material was, three years after the release of their debut record, cause for elation for the huge audience packed into Stubb's BBQ in Austin, Texas, where Meath and producer Nick Sanborn played a set recorded live for NPR Music Wednesday night.
Though Sylvan Esso eventually trotted out a few highlights from 2014's self-titled debut — "Coffee," "H.S.K.T.," "Hey Mami" — the songs from What Now hit hard, stoking an as-far-as-the-eye-could-see field of ecstatic dancing to match the artful and passionate gyrations on stage. The effect captured and elicited what felt like genuine ecstasy; a loose and liberating letting-go that was an absolute blast to witness — even before Meath broke into a bit of Beyoncé's "Flawless."
Note: At the band's request, this video features three of Sylvan Esso's new songs. It is not the full performance:
Set List: