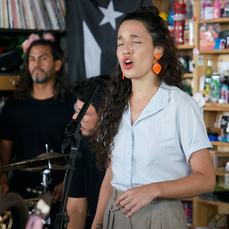 When vocalist Ileana Cabra Joglar and her band visited the Tiny Desk, they'd just arrived from the front lines of the historic demonstrations taking place in Puerto Rico. Two days earlier, they were part of a crowd of tens of thousands who were on the streets calling for the resignation of embattled Gov. Ricardo Rosselló. (Rosselló recently stepped down, effective Friday.)
Right from the start, it was clear what was on iLe's mind in her song "Curandera" — "I am a healer / I don't need candles to illuminate / I bring purifying water to cleanse / Removing pains so they never return" — as congas and percussion shook the room with an Afro-Caribbean beat. The song is from the Calle 13 veteran's most recent album Almadura, which is filled with metaphors and allegories about the political, social and economic conditions in Puerto Rico. If there were any doubt as to her meaning, it was dispelled as she and the band transformed the passion and revolutionary spirit of the massive street demonstrations into a performance unlike many heard in our offices.
In the chorus of the slow-burning "Contra Todo," iLe sings about channeling inner strengths and frustrations to win battles and remake the world. Her lyrics are rich with history, capturing the spirit of the streets of San Juan even as she stood, eyes closed, behind the Tiny Desk. Her entire performance is a startling reflection of this moment in Puerto Rican history.
By the time iLe and her band launched into "Sin Masticar," they'd already captured the full power of protest, as their musical arrangements raged with the intensity of a crowd joined by a shared cause and pulse.