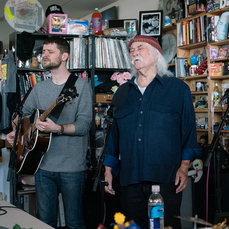 Moments before the first note at the Tiny Desk, David Crosby needed the mics rearranged: He asked that his microphone be positioned evenly with the rest of his bandmates, rather than in front of them, explaining that while his name is the one on the marquee, The Lighthouse Band has no hierarchy.
That band is an inter-generational ensemble, featuring Snarky Puppy bandleader and bassist Michael League, as well as guitarist Becca Stevens and keyboardist Michelle Willis, both accomplished singers and songwriters in their own right. They all first came together while the members were collaboratively writing and recording for Crosby's 2016 album Lighthouse. Everybody sings in this band, trading lead vocals for harmonies and vice-versa in just about every combination.
If you follow him on Twitter, you know that Crosby hasn't abandoned the political poetics that once helped buttress the movement in the '60s and '70s, referencing the shifting cultural sands with lines like, "It's time to turn the tide / Boys, sit back and let the other half drive." Connecting the present to the past, the quartet also brought along a rearrangement of Joni Mitchell's "Woodstock" from a version Crosby recorded almost 50 years ago with Stephen Stills, Graham Nash and Neil Young on Déjà Vu. (It's also the final track on The Lighthouse Band's 2018 album, Here If You Listen.)