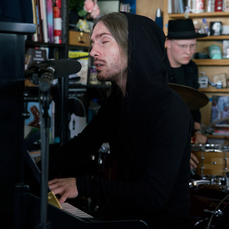 When Among Authors arrived at NPR, the Seattle band seemed like a pack of eager pups — and with good reason. The odds of this unsigned, self-managed quartet playing a Tiny Desk concert was pretty small, but Among Authors is a band that beats the odds. Nearly a dozen years ago, at 23, bandleader Ian Ketterer had open-heart surgery. Born without a thumb on his right hand and deaf in his right ear, he plays piano and sings. And, out of more than 6,000 entries to our 2018 Tiny Desk Contest, Among Authors was one of the most original bands I'd seen — so much so that we invited the group to perform as part of our Tiny Desk Contest tour in Seattle. I was even more impressed by Among Authors' songwriting and keen, spare musicianship at that KEXP-sponsored event, so I invited them to play a Tiny Desk concert. By the time their big day came, nearly a year later, they were ready — nervous, but ready.
Ian Ketterer sat behind our upright piano, partially hidden by his hair and hoodie. Patrick Brockwell's clean look provided a stark contrast, and his no-frills, perfectly placed rhythms matched his appearance. The two guitarists, Jon Livingston and Jason Ketterer (Ian's brother), played intertwining melodies, often lifting the songs from their dimness while embracing the mystery in the lyrics.
There's a clear sense of how deeply this band cares about its work. Among Authors' music isn't casual; there are songs within their songs, and they're not always catchy. They take you on a journey — one I'll continue to follow.