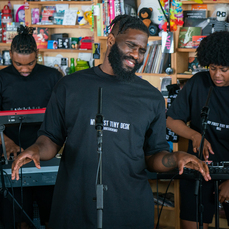 Hailing from the southwest region of Houston and of Nigerian descent, Tobe Nwigwe made his Tiny Desk debut a family affair, with an entourage that included his seven-week old daughter. The baby was in the arms of Tobe's wife, Fat, known for her striking beauty and lead role in the magnificently directed music videos that have paved the way to Tobe's rapid growth on Instagram.
Baby Fat shared the stage with Tobe's exclusive producer and emcee, LaNell "NELL" Grant, band members and backup singers who, like soldiers in arms, performed a tight, orchestrated and musically rich set. If there were any doubters in the office, they were quickly won over.
Tobe's performance was a five-song medley sandwiched effortlessly into a 15-minute block. Launching with "Houston Tribute," he used clever and evocative wordplay to rap about coming of age in the South. Accented almost hypnotically by a trio of harmonies provided by background vocalists Luke Whitney, David Michael Wyatt and Madeline Edwards, Tobe's mindful words are like a life hack for those seeking guidance. Throughout the set he offered pleas for listeners to look past inherent hardships and evil and to keep their eyes on the prize, while he reflected on his own decision to go against his Nigerian roots and parental expectations to pursue his dreams of being a rapper.
And through it all, young Baby Fat sat silently in her mom's arms, absorbing the spiritual energy of her dad's music.