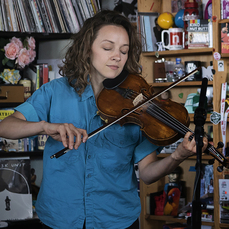 Andrew Marlin and Emily Frantz made everything seem so easy, pulling a few acoustic instruments out of their car and, in no time, huddling around a single microphone behind the Tiny Desk. With that, Mandolin Orange was ready.
Emily bowed her fiddle while Andrew strummed a guitar and sang about his mom being carried away in a hearse. "Golden Embers" is the lead-off track to Mandolin Orange's 2019 album Tides of a Teardrop. This song shines a light on the darkness that fell on Andrew's family when he was 18.
Now ten years into playing together, this couple from Chapel Hill has a family of their own and recently released their sixth album. The two of them sing and play in such complementary ways; it's heartwarming to watch the ease with which they perform and harmonize. Their second song at the Tiny Desk, "The Wolves," is a story song that, for me, tells a tale on an older woman's life, the "hard road" she's taken and that feeling of wanting to howl at the moon when all is finally right.
There is joy and thoughtfulness in the music of Mandolin Orange. The duo's set ends on the thoughtful side with "Wildfire," a fan favorite from their 2016 album Blindfaller. It's a song with a wish that the Civil War would have left racism to rot on the battlefield, and yet it still rages like "wildfire." It's a sobering message presented with a gentle tone, a tone that instilled hope inside of me — hope that we may all learn the lessons of history and rise above them.