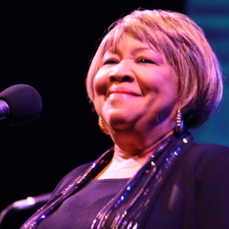 In the past decade, Rock and Roll Hall of Fame member and genre-blurring soul singer, the mighty Mavis Staples took a refreshing Windy City twist, divining a new creative wellspring of songs with fellow Chicago resident and thoughtful rock workhorse Jeff Tweedy.
The palpable magic of their collaboration sparked in Tweedy's loft studio — only 10 miles from Staples' Southside Chicago childhood home — was captured like lightning in a bottle on Staples' third appearance on Mountain Stage. The historic recording happened at the 2011 Celtic Connections Festival in Glasgow, Scotland; it was Staples' first time performing in Scotland and Mountain Stage's first-ever trip overseas.
This extended set opened a window of light onto the first of the four Staples/Tweedy album collaborations. Staples and her band (drummer Stephen Hodges, bassist Jeff Turmes, guitarist Rick Holmstrom and back-up vocalists Vicki Randle, Danny Gerrard and Yvonne Staples) shared seven songs from You Are Not Alone, which took home the Grammys' best Americana album in 2011.
In this segment, originally aired in April 2011, Mountain Stage host Larry Groce introduced Staples by saying, "If you want to hear America, you need to hear her." Staples proceeded to weave a rich, rocked-up gospel tapestry of historic songs such as "The Weight," "Freedom Highway" and "I'll Take You There," up through the then-brand-new "You Are Not Alone."
Staples, who began her career five decades ago alongside her father, Roebuck "Pops" Staples, in the iconic Staples Singers, continues to preach the gospel of unity across races and divides in America. In 2020, Staples, who has collaborated with everyone from The Band and Bob Dylan to Prince and Curtis Mayfield, received her ninth Grammy nomination for best American roots performance with Norah Jones for their collaboration, "I'll Be Gone," from the album Pick Me Up Off The Floor (Deluxe Edition).
Her latest collaboration with Tweedy was the 2020 single, "We Are All In It Together." The song's proceeds go to "My Block, My Hood, My City," a Chicago non-profit helping seniors get the essentials to fight COVID-19.
This concert originally aired April 4, 2011.
Copyright 2021 West Virginia Public Broadcasting. To see more, visit West Virginia Public Broadcasting.