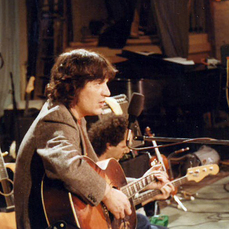 Credited with putting rock and roll back in conversation with its country roots, 1994 Rock & Roll Hall of Fame inductees The Band have performed "everywhere, with everyone," including Mountain Stage in 1994 and 1996.
In this archival session from Feb. 5, 1989, Rick Danko, The Band's bassist and vocalist, and Garth Hudson, one of rock's greatest organists and keyboardists, stopped in to share three iconic Robbie Robertson-written songs with an appreciative audience.
Host Larry Groce knew Hudson and fellow The Band member, Richard Manuel, from their work on his 1983 album Medicine Man. He warmly welcomed Hudson and Danko, who had been touring with Levon Helm that year (1989) in Ringo Starr's first All-Starr Band.
A reverential, church-like hush came over the audience as Hudson's piano and Danko's vocals trod softly, tenderly and passionately into the loneliest time of day, "Twilight." Their version was so good that Groce featured it on the 1991 compilation The Best of Mountain Stage, Vol. 1., alongside other iconic performers such as Dr. John, NRBQ, Buckwheat Zydeco and Richard Thompson.
Danko, who would pass away 10 years later in 1999, dives deeper into the vocal darkness of "It Makes No Difference," bringing true sorrow to Robertson's poetic fable. "And the sun don't shine anymore / And the rains fall down on my door / Now there's no love / As true as the love / That dies untold / But the clouds never hung so low before," he sings.
Hudson's soaring saxophone solo sweeps away the clouds at the song's end, sending the crowd into thunderous applause. "Maybe you can help us sing along on this next one?" Danko humbly asks before they ramble into "The Shape I'm In." A rowdy, full-on jam with those on stage and the audience commences, with a hand-clapping crowd happily rumbling in the alley like it's their last radio waltz.
Set List: