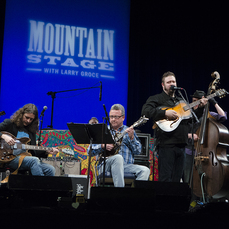 (You can watch a song from this set on our Live Sessions Channel.)
Fayetteville, W.Va., native singer-songwriter Andrew Adkins made his Mountain Stage debut last year with a sold-out January show at the Culture Center Theater in Charleston, W.Va.
Though playing Mountain Stage for the first time, Adkins is certainly no rank stranger to regional bluegrass audiences, as he spent seven years fronting the hard-traveling Appalachian stomp-grass unit, Wild Rumpus.
Backed by an all-star band that included some of West Virginia's top shelf musicians — Bud Carroll (guitar), Johnny Staats (mandolin), Clint Lewis (bass), Annie Neeley (backing vocals) along with Mountain Stage Band members Julie Adams (backing vocals), Ammed Solomon (drums), and Ron Sowell (acoustic guitar) — Adkins played songs from his fourth solo album, Who I Am, which was recorded by Carroll and produced by Sowell (who is also the Mountain Stage musical director).
They began with "Fragile Heart," a Prine-esque tune about gathering wisdom the hard way. "I remember every word / Of every lesson I've learned / Even the ones that tore me apart / They all shaped this fragile heart," Adkins sang.
Adkins, whose music has always comfortably saddled a line between traditionalist and progressive, didn't take long to flex his bluegrass muscles. On "Echoes," he pulled back a dark and misty veil on his own murder ballad with an ill-fated wedding trip to Knoxville, Tenn., complete with a pistol, a dagger, a river and all the trouble a song can allow.
The stand out title cut, "Who I Am," follows a car ride whose soundtrack is a veteran's vivid remembrance of a life gone by. "My first car had a big ash tray / I filled it full of pocket change / And dreams of where I was bound," Adkins sang.
To close, Adkins showed his serious side with a bluegrass gospel hymn, "Worries Behind," which he wrote to honor a friend who lost his battle with opioid addiction and to honor those still dealing with addiction. Adkins organizes the Fayette Songwriter Festival, a multi-venue, three-day festival that takes place Feb. 13-16 throughout Fayetteville, W.Va. Now in its second year, the festival benefits the CODA Mountain Academy, an after-school arts program.
SET LIST