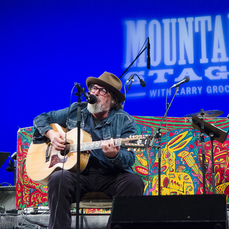 For the past three decades, American songwriting legend Peter Case has been stopping by Mountain Stage to share original stories and songs packed with his wry humor and Hunter S. Thompson-levels of attention to the oddly refreshing details. Carved from his long, strange musical trip — from Buffalo, N.Y., to California — Case pioneered a punk and roots deep-dive that would help enrich the genre-blurring Americana scene. He also served tenures in the 1970s California punk group The Nerves, followed by The Plimsouls, his rock and roll band that garnered success in the early 1980s.
On March 17, 2019, Case migrated back to Mountain Stage with host Larry Groce to share songs from his latest recording, HWY 62, which features guest spots from Ben Harper and D.J. Bonebrake. Groce introduced Case, a long-time friend of Mountain Stage, as "one of the most interesting performers we have ever had on the show."
The alt-folk hero burst out of the gates with "If I Go Crazy." For his latest trick, Case stated that he didn't have time to tell the full story of the song's inspiration but would say a few key words: "Casino, Dennis Hopper, horse race hot tip, 200-to-1 odds, all my money, horse falls down, catches up with all but three horses."
Introducing the career reflective tune, "The Long Good Time," which wasn't included in the radio broadcast, Case waxed nostalgic about his many Mountain Stage appearances with quick but rich details. He told a Unitarian joke by the late, great, folk icon Dave Van Ronk, and shared memories of playing Mountain Stage with Gordon Lightfoot, Mavis Staples and Groce.
With tongue firmly planted in cheek, Case proved that his razor-sharp rootsy edges were finely honed and banged out the humor-filled acoustic power-pop gem, "I'm All Dressed Up for Trial."
Case became deadly serious and topical on "Water From A Stone," tackling a myriad of modern American problems from immigration, cancer rates and soaring student loan debt to general anxiety.
To end his set, Case went a-roving back to the beginning, enlisting the Mountain Stage Band in a rousing version of The Pogues' "A Pair of Brown Eyes." Case jokingly noted that he included the song on his first self-titled album "in 1902" — which history shows was actually released in 1986.
SET LIST: