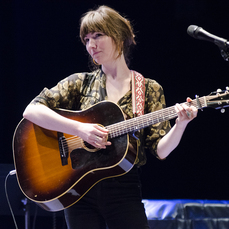 Portland, Ore., singer and songwriter Anna Tivel made her Mountain Stage debut sharing songs off of her fourth record, The Question. The performance was recorded at Ohio University in Athens, Ohio, with help from Mountain Stage partners at WOUB Public Media.
Although playing live with her Wisconsin-based band (with whom she recorded The Question) for the first time in public, Tivel made quite an impression. Mountain Stage host Larry Groce and the Mountain Stage staff named the set one of their 20 favorite performances from 2019.

"She writes quiet stories of ordinary life," Groce noted while introducing Tivel. "She writes very powerfully and she puts you in the situation."

With hushed percussion, piano, mellow bass and acoustic guitar, Tivel ushered the audience into a situation — a story-song about a migrant worker on a dangerous desert night journey to find a better life in the U.S. with "Fenceline."
Tivel showcased her keen sense of observation on the title track, "The Question," which started as a poem composed in her head while walking in New York. Observing through a brownstone window, she saw a man putting on a wig and makeup. In "The Question," she imagined his struggles and joys in a life as a drag queen who works days as a gas station attendant.

While the band wove beautiful, acoustic tapestries on the first two numbers, they burned with a darkness and edge on "Worthless," which Tivel told the audience was about "all the ways that people can hold each other up or push each other down with just their words." With Ben Lester's keys madly swirling, Tivel's vocal boiled with lyrics about having been done wrong. She closed with another cinematic strand, her love song, "Two Strangers."
Tivel has recently reconvened in the studio for a follow-up with an expected release date in the fall; she's working with the same band that joined her here, along with Shane Leonard (producing) and Brian Joseph (engineering and mixing). She is touring Europe in March and early April.
SET LIST: