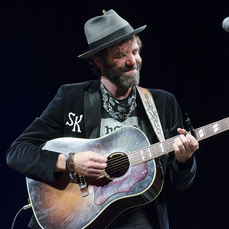 Making his sixth trip to the Mountain Stage since 2007, Stephen Kellogg appeared last April to share songs off his reflective and poignant latest solo album, Objects In The Mirror.
Kellogg is married to his high school sweetheart, and together they have four daughters who help them run "The Kellogg Family Store" on his website. It's no wonder then that — during a career that includes seven recordings with his band, The Sixers, and 11 solo albums — Kellogg has written early and often about his family. As host Larry Groce noted, that's part of his charm. "He does what he does best: mine his own life and relationships to come up with some truths," Groce said while introducing Kellogg. "I think he does this as well as anyone does this; Loudon Wainwright does this and Paul Simon does this, and I think he is right up there with them."
He opened up with the energetic acoustic sunshine of "All The Love That Comes to Me," a song about being blessed. Although teasing with the audience that he has written so many songs about family he feels like "Raffi for adults," Kellogg couldn't leave a tender moment alone, treating the audience to his truly touching tune of guidance, "Song For Daughters."
Supported by his band — which features guitarist Eric Donnelly, with whom he co-wrote six songs on his latest album — Kellogg shared a song they wrote about the roller coaster of insecurities life brought forth after coaching his daughter's middle school basketball team during a losing season, called "High Highs, Low Lows."
The gem of the set had to be "Objects In The Mirror," the title cut of his latest recording project as well as the companion book. Kellogg joked that over the years, various record labels wanted him to be less specific and paint with a broad brush to be more popular, something he never cared to force. Chalking up life's milestone moments with specific times and dates, Kellogg cuts right to the bone with his performance.
He closes with one of his most well-known and well-loved songs, "4th Of July"; Kellogg and the Sixers performed it the first time he appeared on Mountain Stage back in 2007.
Kellogg is putting the final touches on his first book, Objects in the Mirror: Thoughts on a Perfect Life From An Imperfect Person, scheduled for release May 19, 2020.
SET LIST: