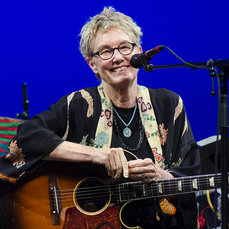 Austin, Texas songwriting royalty Eliza Gilkyson made her eighth visit to Mountain Stage last May with guest host Kathy Mattea.
Mattea gave the member of the Texas Music Hall of Fame and the Austin Music Hall of Fame a fitting introduction, calling her "a world class songwriter bearing beautiful and poetic witness to the difficult and the impossible."
Bearing gifts of redemption songs from her record Secularia, Gilkyson let her rich creative roots show, gently shaking the family tree for a sweet and gentle song about a night-singing mockingbird called "Solitary Singer." The album opener is based on a poem her grandmother Phoebe Hunter Gilkyson wrote in 1949; her dad Terry put it to music in 1951 and it would become a theme song for his radio show.
Gilkyson, who has been coming to Mountain Stage since 1989, called Secularia a collection of secular hymns she has been secretly hiding at the end of her records for years. With Mountain Stage's Julie Adams softly singing harmony vocals and Jim Henry on mandolin, Gilkyson offered up a gorgeous hymn about wandering and seeking out life's truths. "I'm living for the glimpses of life's holiness through the looking glass," she sang on "Through the Looking Glass."
Gilkyson, whose song "The Great Correction" was covered by Joan Baez on her latest album, shared two more hymns of hope: "Seculare," a song she wrote with Mark Andes praising some of the joys of everyday life (children, songs, hope and "the fishes brown and silver") and "Lifelines," co-written with Bellarosa Castillo. As Gilkyson can so deftly do, she wades through the darkness of reality to emerge hopeful in the power of community.
Gilkyson's next album, 2020, is slated for an April release on Red House Records.
Set List: