When it came to Monday night’s concert lineup, the general consensus was that there were too many good shows to choose from. Pissed Jeans at The Ox, Holy F–k and Indian Jewelry at Johnny Brenda’s, and No Age, Small Black, and Grandchildren at First Unitarian Church. Of course, that’s a good problem to have (and better than the alternative). So we tried not to sweat the decision too much, and felt very little remorse over skipping out on the first two options in favor of the last one.

If you haven’t seen Granchildren‘s name plastered all over the Internet by now, get ready for it. The local sextet’s much-anticipated debut album, Everlasting, will be released by Green Owl on September 28th, and we fully expect it to earn a spot on most “Top 10 Local Albums Of 2010” lists—if not more lofty accolades. (Look for our interview and record review prior to the band’s record-release show Friday, October 8th, at Johnny Brenda’s; meanwhile, you can listen to a streaming version here.) Monday night, everything about Grandchildren’s onstage setup screamed “art rock”: the all-white outfits, the two drum kits (OK, more like one and a half), the montage of colorful images projected onto the band members, the musical-chairs-esque switching of instruments in between (and occasionally during) songs. If you’re the kind of person that immediately dismisses those things as pretentious, you probably wouldn’t be as impressed as we were by the band’s set of rhythm-oriented experimental rock, which was accentuated by numerous vocal harmonies and nimble acoustic guitar work. A break toward the end of the set would have served as the perfect stopping point for an opening performance; instead, it was a slightly awkward pause before the band launched into two more songs, that—in addition to feeling tacked on—spread Grandchildren’s bag of tricks a little too thin. But, if our only gripe with the band’s performance is that it was too much of a good thing, we can live with that.

How much reverb can one band’s vocals, synthesizers, and glitchy electronics be drenched in before the audience gets lost in a giant cavernous mess, with nothing left to cling to other than the throbbing beat of an electronic kick drum? Brooklyn quartet Small Black seems determined to find out. Once you get past the unfortunate “chillwave” label that lo-fi electronic acts such as Small Black have been saddled with (then again, how else would you describe the music—”nu-new-wave?”), anyone who cares to look will discover plenty of admirable moments and small flourishes on the band’s upcoming full-length, New Chain (to be released by Jagjaguwar on October 26th). Too bad that, during Monday night’s live performance, it was impossible to cut a swath through the echoing din of electronic instruments. 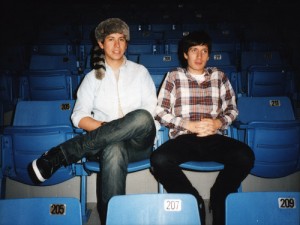 L.A. noise-rock duo No Age has been been called many things by an adoring press: one of the biggest names associated with the scene surrounding L.A.’s all-ages, DIY venue The Smell, spiritual successors to bands such Mission Of Burma, and a pair of absolute road warriors who are constantly on tour. However, it still catches us a little off-guard when bands that are often lauded for their experimental tendencies simultaneously serve as the perfect soundtrack to a mosh pit. But there it was, right in front of the stage at First Unitarian Church, as guitarist Randy Randall and drummer Dean Allen Spunt (who were occasionally accompanied by knob-twiddler/noise-producer Facundo Bermudez) plowed their way through a set of riff-heavy, ear-splitting rock primarily off the band’s upcoming Sub Pop album, Everything In Between. Moshing and crowd surfing at No Age shows aren’t anything new, and—as far as we can tell, nobody in or around the pit hurt themselves too much (with the possible except of one younger guy in a red-and-white striped t-shirt, who took what appeared to be a pretty rough tumble)—so, you know, whatever works for you. What we really want to know is—in addition to seeing what we imagine was the best show out of the night’s big trio of options—did we also get the best mosh pit of the night?