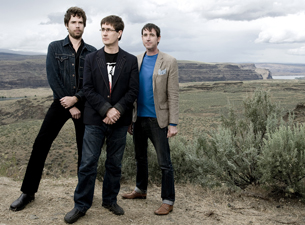 FRIDAY, APRIL 15
Many of The Mountain Goats‘ 13 studio albums have specific themes—like The Life Of The World To Come, in which every song is named for a bible verse, and We Shall All Be Healed, which details the lives of meth addicts. Singer-songwriter John Darnielle’s most recent record, All Eternals Deck (released last month), has no obvious theme (though there are songs about Judy Garland, Neanderthals, and Goya paintings), but Darnielle has said that the album is tied together by the theme of survival. That would certainly be fitting: He’s been recording ultra-literal, nasally pop songs for over 20 years; to survive that long in the music industry is a feat, but to survive that long as an indie artist in nearly unprecedented. As is the case with his other albums, reviews of All Eternals Deck regularly laud Darnielle as one of the best lyricists of the last 20 years. The Mountain Goats perform with Megafaun at 9 p.m. at Theatre Of The Living Arts; tickets to the show are $27. —Dave Simpson

SATURDAY, APRIL 16
Yoni Wolf of WHY? frequently mentions his ambivalence toward touring, so it will be interesting to see how he handles three shows at First Unitarian Church this weekend. He’s sold out all three performances, despite the lack of a new album since his 2009 LP, Eskimo Snow. Wolf has always pursued a versatile musical integrity over music industry success: He is an original member of the Anticon Collective and gained notice after releasing songs with experimental rappers Doseone and Odd Nosdam; despite their critical acclaim, Wolf left the group to pursue solo work. He’s always mixed hip-hop and folk (as well as other genres), but Eskimo Snow was the least hip-hop. The album descended further into the darkness with which his previous releases danced. It’s obvious from the sold out shows that Wolf still has the audience’s attention; the remaining question is what he will do with it. Yoni Wolf performs with Hop Along at 6 & 9 p.m. Saturday, April 16, and 6 p.m. Sunday, April 17, at First Unitarian Church; tickets to the all-ages show are SOLD OUT. —Dave Simpson