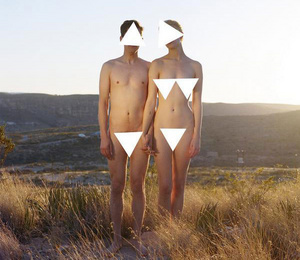 The two members of YACHT will tell you that it’s not just a band, but also a belief system and a business—and that everyone is welcome to become a part of it. For now, however, we’ll stay focused on multi-instrumentalist Jona Bechtolt and vocalist Claire L. Evans, the two core members of the highly conceptual electro-pop group. Bechtolt founded YACHT as a side project while performing alongside Mikhaela Yvonne Maricich in The Blow (which released several albums on K Records in the mid-’00s). Then Bechtolt saw a light phenomenon in the Texas desert and met Evans (who, at the time, was a science journalist), which is where things started to get spacey. Bechtolt left The Blow and YACHT became more than a band—releasing videos, spiritual literature, lists of mantras on its triangle-adorned website, and preaching a way of life. It’s “not a religion” and it’s “not a cult” but their lexicon is full of vagaries and Scientology-esque acronyms. Shows include spiritual warm-ups, chakra alignment sessions, and Kabbalistic innuendo. (Oh yeah, and they also play music.) Bechtolt and Evans may be entering Temporary Autonomous Zones and following the Left- and Right-Hand paths, but audiences will be dancing to pop jams such as “Psychic City (Voodoo City)” and “I’m In Love With A Ripper.” YACHT performs with Light Asylum and Jeffrey Jerusalem at 7:30 p.m. at First Unitarian Church; tickets to the all-ages show are $13. —Dave Simpson