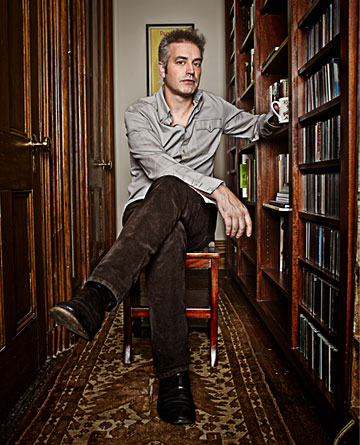 A Philadelphia resident for the last year, singer-songwriter and novelist John Wesley Harding has a new album coming out on October 11th called The Sound Of His Own Voice on Yep Roc Records. He’s offering a free download of a new song, “Sing Your Own Song” on his Facebook page here. In his own words, here’s Wes on the new album.

“Wes here. I’m thrilled that Yep Roc Records is releasing the new album The Sound of his Own Voice on October 11th. We’ll get more details to you soon, but for the time-being, we’d like to offer you the chance to download a song from the album, the first song in fact: “Sing Your Own Song.” Please enjoy at your leisure. Please feel free to share with friends, followers and other freaks. I can also tell you that the album, recorded in Portland OR, produced by Scott McCaughey and me, and mixed by Tucker Martine, features Chris Funk, Jenny Conlee, Nate Query and John Moen (members of The Decemberists), along with Peter Buck and Scott McCaughey, on every song. Also featured, as you’ll hear in the fullness of time, are Rosanne Cash, Laura Veirs, John Roderick, Steve Berlin and many others.”