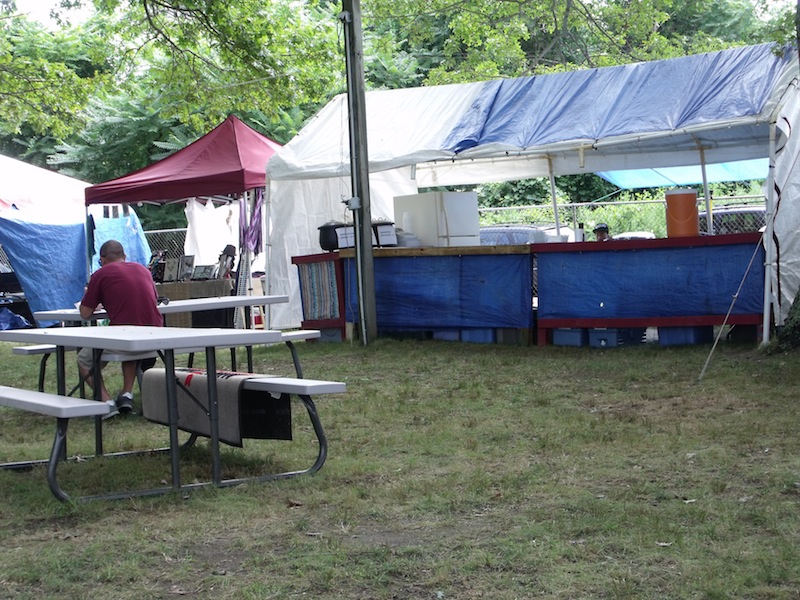 The first annual Escape To New York festival was supposed to be a celebration of indie rock, summer, and quirky party planning—a back-to-nature, ’60s throwback. But its lofty ambitions ended up a little muddied by the lack of organization and the insufficient preparation.

Set on Southampton’s Shinnecock Indian Reservation, the festival aimed to fuse music with upscale food, eccentric art and a flower-child aesthetic. To a point, they succeeded. Shinnecock Reservation was everything you could hope for in a festival space: flat, grassy fields ringed by groves of trees, a slight sea breeze rippling through the air. The main stage was bedecked with huge, sculptured Technicolor hibiscus blooms, a theme echoed in the woods nearby, where flowers lit with neon spotlights hung in the branches. (A taxi, nose-down on the stage with the trunk open, was an unexpected and eclectic touch.) It was sunny and almost beatific, watching women in gauzy skirts and ivy head-wreaths dancing to electro beats. The line-up was a solid mix of indie rock, folk and dance pop. And the intimate acoustic stage provided a cozy opportunity to relax on picnic benches and enjoy live music.

The attention to detail was often lovely: fat yellow candles at the center of a make-shift circle of stumps fashioned as seats; an antique brocade sofa in the midst of the forest, surrounded by a mismatched set of dining room chairs (looking like the kind of place the Mad Hatter might hold a tea party); a jungle gym filled with rose petals and open for barefoot lounging. There were two bars, one with a rustic, old-fashioned feel; the other constructed out of recycled washing machines. A DJ dance tent (which, on Saturday, featured Xaphoon Jones of Philadelphia’s own Chiddy Bang) and a giant chalkboard offered further diversions.

The Submarines’ summery sound was an ideal backdrop for the bright sun and cheerful revelers on Saturday afternoon. Au Revoir Simone’s sweet, melodic electronica had the crowd swaying and shimmying; the headliner, Edward Sharpe And The Magnetic Zeros faced disappointment when part of the audience deserted mid-set after hearing “Home.” Sunday’s bill had the makings of a memorable day in indie pop paradise, with Mates Of State, Savoir Adore, and Of Montreal all slated to play. Its cancellation was not only a blow to Escape To New York ticketholders. After fellow New York area festival Music To Know was called off, Escape To New York promised free entry on Sunday to those who’d already bought passes for Music To Know.

The biggest issue with Escape To New York wasn’t the soggy grounds, the sparse attendance, or even the sky-high prices ($13 cocktails, anyone?) but the planning—and an obtuse bureaucracy. While festival officials claimed that Sunday’s performances were cancelled due to rain, I overheard staff saying that it was really because not enough tickets had been sold, and that an electrician had been asked to certify that the stages were dangerous, despite the fact that they weren’t. Regardless of the reason, officials waited hours before making an announcement, forcing fans to wait in the parking lot without news and leaving vendors with heaps of uneaten and unsold food. Moreover, though Saturday ran fairly smoothly, the sets were late and, allegedly, when the bathrooms overflowed, officials were slow to respond to the problem.

Escape To New York, so promising in theory, stumbled a bit in execution. But I have high hopes that if it has a second incarnation, it could be a very successful event. With some efficiency and foresight, Escape To New York has the potential to brighten the summer festival circuit with an energy both unique and DIY.