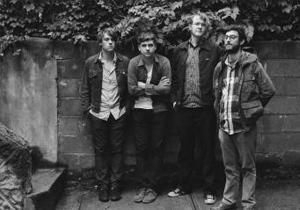 FRIDAY, AUGUST 12
For a band that exists within the indie spectrum, Woods has no compunctions about wandering deep into jam-band territory. The Brooklyn-based quartet’s lo-fi, psych/folk-pop is punctuated by extended solos; live, the band is more than willing to go beyond rehearsed material and venture into uncharted improvisations. As a result, seeing the band live is often a wholly different experience than listening to its recorded output. And it’s arguably more worth your money and time than paying to see a band that merely memorizes and spits the hits back out. Woods performs with White Fence and Lantern at 9:15 p.m. at Johnny Brenda’s; tickets to the 21+ show are $12. —Kiley Bense

SATURDAY, AUGUST 13
This summer, Girls Rock Philly is giving 80 local aspiring female musicians ages 9–17 the opportunity to step from singing in front of their bedroom mirrors to the stage of World Cafe Live. The non-profit summer camp brought together girls from the greater Philadelphia area to learn to sing and play guitar, bass, and drums, building self-esteem along the way. The campers formed 15 bands, which wrote and rehearsed their own songs over the course of the week-long program. (They also will have the chance to record a compilation CD in WXPN’s studios.) Today, each band will perform its finished work during the Girls Rock Philly Showcase. The Girls Rock Philly Showcase begins at noon at World Cafe Live; tickets to the all-ages show are $10. —Claire Fishkow

SUNDAY, AUGUST 14
The self-described “stonegaze” trio True Widow has earned its name. The band’s sound is hushed without losing a bit of volume; it’s as full as it is chill, like a summer breeze (with reverb). The Dallas, TX-based group formed in 2007, and self-released an eponymous debut in November 2008. Guitarist Dan Phillips and bassist Nicole Estill share vocal duties, while Timothy Starks plays drums. Their epically named sophomore record, As High As The Highest Heavens And From The Center To The Circumference Of The Earth, was released via Kemado this past March. Before stopping in Philly, the trio spent some time opening for Kurt Vile & the Violators. True Widow performs with Restorations at Kung Fu Necktie at 7:00 p.m.; tickets to the 21+ show are $8. —Claire Fishkow