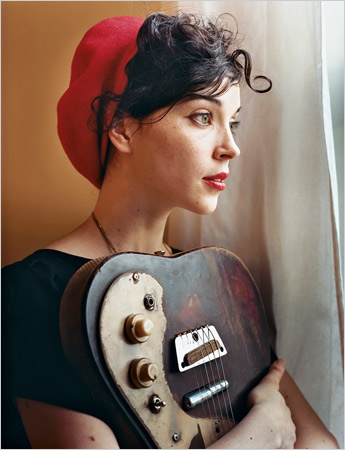 Indie-pop chanteuse St. Vincent (Annie Clark) offers a sound as eclectic as her resume. After studying at Berklee College Of Music, touring as part of the Polyphonic Spree, and performing with Sufjan Stevens’ backing band (in its Illinois heyday), her own brand of baroque indie rock manages to combine the generous sound of mixed instrumentation with a gentle aesthetic. On the 29-year-old Dallas native’s latest album, Strange Mercy, Clark works to make prettiness a second priority, instead exploring her own guitar-tapping skills—experimentation is clearly more of a focal point here than on her 2007 debut, Marry Me and 2009 follow-up, Actor. Even with an unexpected amount of chaos dominating her latest sound, it remains gracefully controlled by her acute attention to detail, like her education and work experience finally landed her the perfect gig. St. Vincent performs with Cate Le Bon at 8:30 at Union Transfer; tickets to the all-ages show are $16-18. —Marielle Mondon