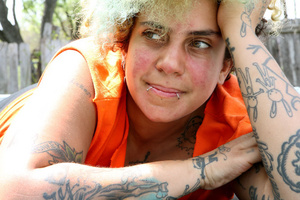 On paper, singer-songwriter Kimya Dawson has committed every artless crime in creating music. Her homemade, low-fi records are filled with rambling talk-singing lyrics about love and longing, evocative of a neurotic teen writing their first poem against a three-note song. The success in Dawson’s songwriting, then, comes from the Olympia-native’s unexpected sense of humor and awareness of her clichéd style; she manages to hang on to all the good parts that come from the honesty of adolescence and simultaneously refuses to be embarrassed by all the stupid, embarrassing parts of it. After reaching mainstream recognition for her work on the Juno soundtrack, particularly with the much loved duet “Anyone Else But You,” Dawson settled down, had a baby, and released the mildly immature children’s album, 2008’s Alphabutt, featuring winning tracks like “Little Monster Babies” and “Pee-Pee In The Potty.” With the release of her latest album, Thunder Thighs, Dawson levels out her almost-40 perspective with her schoolgirl earnestness and the playfulness of her children’s songs. Despite her assumed wisdom with age, the new music continues to offer Dawson’s always candid, and somehow artful, simplicity. Kimya Dawson performs with Your Heart Breaks at 8 p.m. at First Unitarian Church; tickets to the all-ages show are $12. —Marielle Mondon