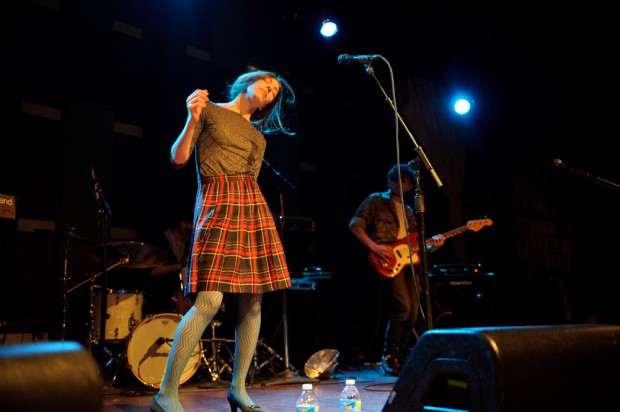 In 2008, Chairlift faced a serious obstacle: proving its worth beyond one extremely viral single. The electronic pop group’s insta-hit “Bruises” was featured in the fourth-generation iPod Nano launch commercial that year, and it was both infectious and overplayed. Thankfully, there’s more to Chairlift than “Bruises.” In fact, at Friday’s Free At Noon show, they didn’t even play it. Their new album, Something, (to be released on Tuesday) is a sweeping and haunting homage to ’80s rock that is more in line with “Evident Utensil,” the second single from their debut album, Does You Inspire You. At Friday’s show, the duo—expanded to a five-member band for touring—played a strong, theatrical set from their upcoming album.

Chairlift formed in Denver, Colorado, originally as a trio that included Aaron Pfenning, Caroline Polachek, and Kyle McCabe. The group intended to write music for haunted houses, but they scrapped that idea for the Brooklyn music scene in 2006. Despite (or maybe due to) their 15 Nano-seconds of fame, Does You Inspire You wasn’t much of a critical success. The singles “Bruises” and “Evident Utensil” set conflicting expectations for the album, which ultimately fell short of living up to either. A tour of North America with Yeasayer followed and the stress of touring paired with growing creative differences began to split the group. Pfenning left Chairlift in 2010 to write music under the moniker Rewards, and Polachek and McCabe continued to make quirky, ’80s infused pop reminiscent of the group’s eerie early dream.

Over three years after Does You Inspire You, Polachek and McCabe have a new album that progresses naturally from where the debut left off—or, rather, trailed off after “Evident Utensil.” Something was written in the back room of an antiques store in Brooklyn and recorded in London with Hot Chip’s producer, Dan Carey. It emits a dark and weird coolness, especially because of the risks that Polachek takes with her vocals. She nearly yodels on some tracks and hits highs seemingly outside of a human register on others. “I Belong In Your Arms,” is this album’s pop gem, insufferable only because its ethereal hook is both difficult to shake and too high pitched to hum. “Sidewalk Safari” features a threatening monologue from Polachek; it was inspired by nightmarish visions that she began to experience after being hit by a car. Something avoids the cliché of “hauntingly beautiful” and instead goes for haunting in a creepy way.

Live, Polachek’s stage presence completely dominates the group’s presentation. When she wasn’t singing, snapping or making otherworldly noises into the microphone, she did a jerky, wobbling kind of punch dance. In a knee-length plaid skirt, with her hair parted in the middle and pulled into a low ponytail, Polachek looked like a Brat Pack character that’d just had her first beer. The performance featured castanets, melodramatic facial expressions and choreographed hand motions. Polachek and McCabe were joined by a keyboardist, guitarist and drummer, though Polachek migrated to the drum set for additional percussion on the brooding new confessional “Guilty As Charged.” After the NPR show finished recording, Chairlift came back for an encore for the World Café Live audience—and the encore wasn’t “Bruises.” Some audience members were audibly disappointed when the group left without performing the iPod Nano hit, but if Chairlift wants to move beyond from their Apple Ad glory days, it was a necessary move. “Evident Utensil” was the encore instead, and it was the evident choice, not only because this album finally lives up to what the single promised three years ago, but also because even Chairlift is tired of hearing “Bruises.” –Naomi Shavin

Sidewalk Safari
Wrong Opinion
Take It Out On Me
I Belong In Your Arms
Guilty As Charged
Met Before
Ghost Tonight
Amanaemonesia
Encore: Evident Utensil