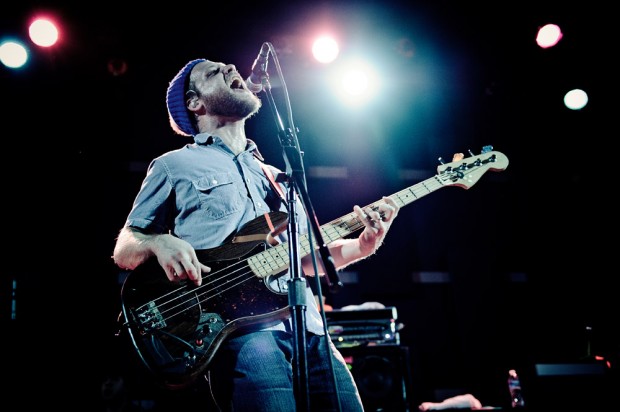 This afternoon, Dr. Dog played two Free At Noon shows at World Cafe Live. Their first show was the scheduled and recorded NPR debut of eight tracks from the band’s new album, Be The Void (due February 7th). Once the recording was over, Dr. Dog was invited to play another song or two for the live audience. So, the group played two more songs…and then two more after that. Six songs later, the encore had grown longer than the set. The band only left the stage because another act was coming in. Not every group could pull this off, but Dr. Dog is a beloved local act with nearly 13 years of history, dozens of songs, and a following of the highest fidelity. Schedule-permitting, Dr. Dog probably would have gone on to play another ten songs.

Dr. Dog formed in 1999 and has seen a few line-up changes. Their current line-up features Scott McMicken, Toby Leaman, Zach Miller, Eric Slick, Frank McElroy and Dmitri Manos, rounding them out to a six-person group for their current tour. The band claims another 20-some-odd people as “honorary members” who have been involved over the years. This large number of people, each with diverse influences and tastes, can be heard in the eclectic music of Dr. Dog. The group takes inspiration from The Beatles, David Bowie, Neil Young and Pavement, among many, many others. Dr. Dog’s work can seem almost erratic, packed with tone shifts and genre benders. Yet, it always sounds distinctly Dr. Dog.

Dr. Dog’s newest album, Be The Void, is no exception to this. It does, however, have a stronger consistency with Dr. Dog’s live performances than previous albums. For this album, the band recorded on electric guitars, trying to recreate the energy and excitement of their live shows. Today’s show burst with that energy as the band showcased material from Be The Void. Dr. Dog’s new album promises grand jams, heavy with guitar, and also softer, blue grass and waltz infused numbers, the diversity that landed the group tours with fellow genre benders, My Morning Jacket and the Raconteurs. Though the first set was a sneak peak of new tracks, the 10-song encore was all about favorites. When Dr. Dog played “Shadow People,” the homage to West Philadelphia from 2010’s Shame, Shame, the lyrics asked “Where do all the shadow people go?” If “shadow people” is code for Philadelphians, the answer is clear. Based on the number of people packed into World Café for the Free At Noon, we go to see Dr. Dog and we stay long past the end of the show. –Naomi Shavin