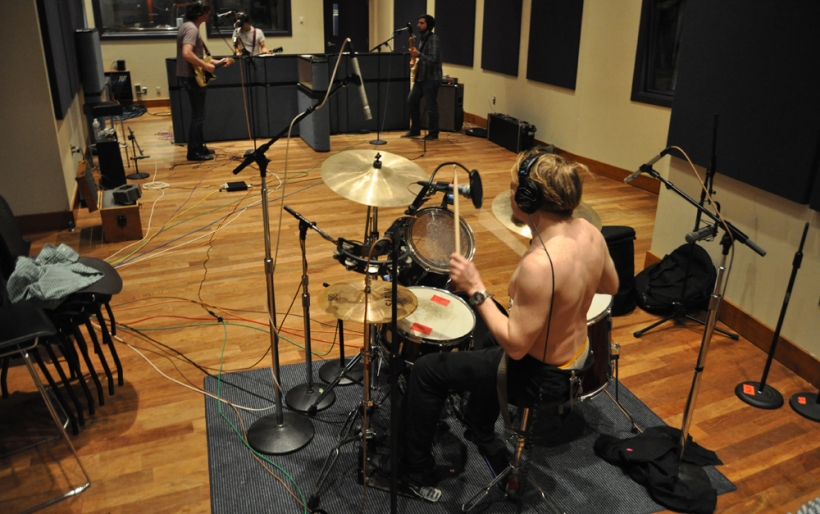 The guys in Philadelphia’s Univox are rock synthesizers. That’s not synthesizers in the EMF / Brian Eno sense – though truly it would be awesome to have a set of keys and bank of sounds literally at your fingertips – but rather in the sense that they’re musicians who pull tones and timbres from the disparate styles of the past three decades, and recontextualize them as something all their own. Or, if that sounds too smarty-pants for you, try this: I trust you’ve heard those cliche comparisons, “sounds like the love child of musician A and musician B jamming with musician C”? Well there’s a reason folks make declarations like that: as listeners, it’s always easier to dig on something new when you can relate it to something you love. On the flipside, as songwriters, its impossible to completely escape one’s influences. So why not embrace them? Univox gets it, and that’s why all across their Key Studio Session, you’ll hear snippets of Bowie, bits of Costello, nods to The Stooges and GBV, in songs that are very much the amped-up, wild and crazy work of these four dudes from Philadelphia who are writing and performing in 2012. Last fall, Univox self-released a fantastic 7″ for “Tonight,” which raucously closed out their session. They tell me they’re spending this winter and spring recording in their basement studio so they can release an album a month next year. I don’t know whether or not to take them seriously. But I do know that the four new songs they premiered – from the garage-y “Better Off By Myself” to the swinging 50s pop anthem “What’s More” – could be potential hits, or at least future nuggets. Judge for yourself tomorrow night when Univox plays Kungfu Necktie with White Birds and Tutlie.