FRIDAY, MARCH 30th
When Delta Spirit self-titled its latest album, it wasn’t just for lack of a better idea. With Delta Spirit, the band shed its former Americana for a more electric sound—which, clearly, they hope to be identified with in years to come. The switch is fairly seamless for Delta Spirit, which performed at the WXPN showcase at SXSW (in case you missed our multiple posts about it) with high-energy songs that capture your attention keep it through the whole album. The band members, known for their experimentation, may change their minds about Delta Spirit’s sound later down the road, but for now the change is a welcome one. Delta Spirit performs with Waters at 9 p.m. at Union Transfer; tickets to the all-ages show are SOLD OUT. —Nicole Soll

The Cleveland, OH-based lo-fi rock quartet Cloud Nothings is currently on tour in support of the band’s third album, Attack On Memory (released in January via Carpark Records). Cloud Nothings performs with Bleeding Rainbow and A Classic Education at 9 p.m. at Johnny Brenda’s; tickets to the 21+ show are SOLD OUT. 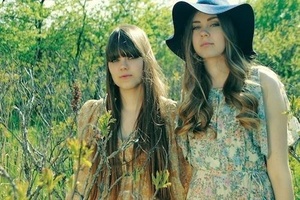 SATURDAY, MARCH 31st
Would a band like Swedish YouTube sensation First Aid Kit be touring through the United States back in the early ’00s, before the term “YouTube Sensation” (and the instant fame it granted) even existed? Probably not, for a variety of reasons—not the least of which is because sisters Johanna and Klara Söderberg would have been only 10 and 7 years old (respectively) back in 2000. In an Internet-less alternate reality, the sisters Söderberg would probably spend most of their musical careers toiling away in the Stockholm rock circuit, making just enough money to keep their plates full of pickled herring. Thankfully, we live in a world where First Aid Kid blew up on the Internet, which afforded the folk duo the opportunity to bring its vocal-harmony-laden, Fleet-Foxes-inspired music stateside in late 2010. Since then, First Aid Kit has released its critically acclaimed sophomore album, The Lion’s Roar, back in January (via Redeye Records), which the duo is currently touring in support of. First Aid Kit performs with Peggy Sue at 8:30 p.m. at Union Transfer; tickets to the all-ages show are $15.