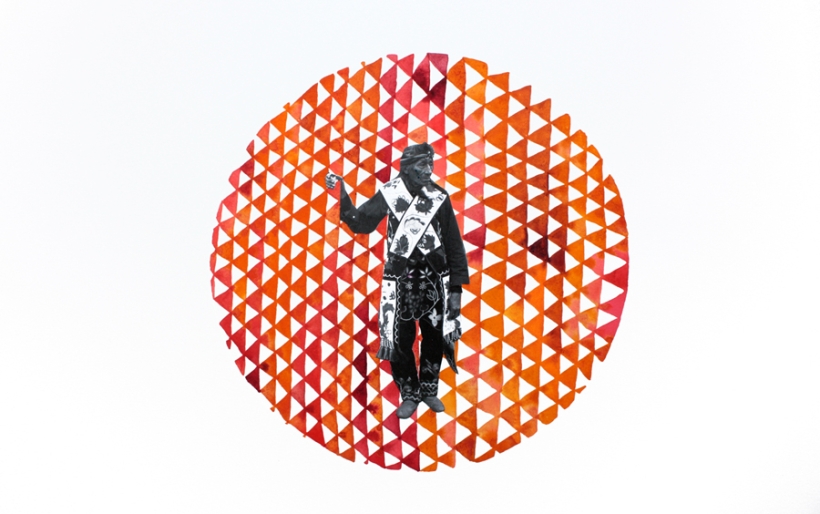 Philadelphia’s Dewey Saunders has a rare knack for bridging the creative spectrum. Under the rap monikers Emcee Unless and Dewey Decibel, he creates pointed, catchy hip-hop, including this year’s fantastic mixtape #BOOMBOXBOOKWORM. But Saunders is also a visual artist, and no lightweight at that – his work has shown up in places that run the gamut from The New Yorker to the cover of the last Brown Recluse album. His latest art exhibition, Indian Summer, opens tonight at Center City’s ING Direct Café.

The Key: Visual art and music are two completely different mediums. Are your methods for recording a song versus making an illustration also different?

Dewey Saunders: They’re both similar processes, even though they’re completely different mediums. I’m in the same mental space when I create, so I’m basically accessing the same zone that allows for visual art or music to happen. If I have an art exhibit coming up, like I do now, I focus on my art side, and have the music on in the background. When I’m done with that, I’ll turn my attention back to music. They work within each other as well, though differently.
It’s funny because the music I’ve been listening to at the time of a show can definitely influence a show. With this show, Kool A.D. from Das Racist put out a mix tape called 51 and it’s incredible. And psychedelic, quriky songs definitely go along with the bright colors in my paintings – when I came up with the title for Indian Summer, I was definitely listening to a lot of Neon Indian.

TK: How did you get started as an illustrator and what are some of the more exciting jobs you’ve done?

DS: I first started as an illustrator in 2007, right after I graduated from Tyler; I did stuff for The New Yorker, did stuff for ad agencies. But now my work is more design-oriented, using my illustration skills. I do album art. I actually just launched a record label, Bold New Breed, with my producer and good friend Rick Friedrich, and I’ll work with the artists to design logos and promotional tools. And then I do these art shows to stretch my visual vernacular in a way, expand it into different realms. When I started out, the stuff I was doing was more collage-oriented, with some painting. Now it’s a lot more painting, with some collage.

TK: There’s always this uncertainty when talking about mixed media work like yours. It’s hard to call it, say, photography, or illustration, or collage, without shortselling it. How do you prefer to think about what you do?

DS: Overall, I don’t like when people say they are “an artist” and they don’t have a specialty. But that’s kind of where I’m at. I could say I’m an illustrator / graphic designer / collage artist / painter, but that’s kind of long-winded. My artwork could exist in the illustration world. I’m not pushing it that way, but I could see it there. Generally, I guess you’d call it fine art informed by graphic design and illustration.

TK: Your artwork is very naturalistic, almost dreamlike, which I feel is an interesting contrast and compliment to your raps – which are punchy and, while not outright aggro, definitely very direct. Do you see the two as expressing different sides of yourself, or is there not that much of a hard / fast distinction?

DS: It’s kind of the same territory. A lot of stuff on my Tumblr is very rustic, woodsy and organic. I see that as my artistic, intellectual side, and it was incorporated into my music at first. But now I’ve taken my music in a more poppy, punchy direction. So they do exist in different worlds, but I would like to draw more of a connection between the two, and make people realize that they both come from the same person.

TK: As a musician, have you ever incorporated your visual art into performances?

DS: I haven’t yet gotten full into the projection thing beyond slides of my work, projections of my illustration side showing behind me. But the whole multimedia thing, that’s left to be explored. I can feel that’s where everything is headed, though, and I think it will make people understand me better as both as rapper and a visual artist.

TK: The work in this show gravitates a lot towards Native American imagery and scenes from western United States. Why?

DS: I’m always been super intrigued by Native American art. I do have some Native American in my blood – from my great-great-grandmother, Aggie Owl, who was part of the Mingo tribe, in Ohio – and it’s something I’ve always been interested in. And about three or four years ago, I was in a group art show at the Pure Gold Gallery called Radlands. It was inspired by a road trip to the Badlands of South Dakota, they built a teepee in the gallery, and I haven’t really revisited that imagery since the show. So this was a chance for me to do that, incorporating the painting style I’ve developed. So it’s a lot of black-and-white photographs of Native Americans with poppy paint colors.
Native American patterns have become super popular in clothing over the past few years, and it’s something people take for granted. So in a way, this is me showing people where that came from. Also, there’s one huge portrait of an older Native American lady; it’s not my great-great-grandmother, but I named it after her. So it’s a personal exploration of family, and a meditation on mortality – I found a lot of images of skulls to use – so it hits on some heavy ideas.

TK: What are some similarities between being a musician and being a visual artist that might surprise people?

DS: Like I said, it’s the creative space that I’m in, the zone, whatever you want to call it. A lot of my practices do overlap. For instance, I keep a notebook where I jot down words, phrases as they come to me. And then when I go to write a whole song, sometimes I’ll turn to those words and phrases and combine them to make lyrics. And as a visual artist, I worked in collage for so long, and it’s the same idea – collecting small bits of interesting things, and then turning them into this new thing entirely. And also, what I use to create, whether its Photoshop versus working in Logic or Pro Tools, a lot of those programs use the same structure and format. It’s really two sides of the same coin.

Indian Summer opens tonight, Fri. May 4, from 5 to 8 p.m. at the ING Direct Cafe, 1636 Walnut Street; Saunders’ latest zine, Weekend Warriors, will also be available at the show, which runs through May 11.