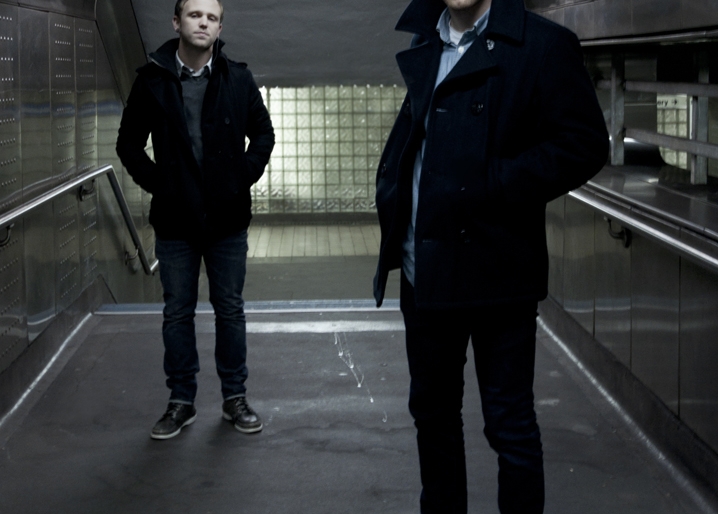 Get to know Crozet (playing Kungfu Necktie on Saturday)

Philadelphia has historically been a strong scene for electronic music innovation, from Diplo and Data Garden in the past decade, Josh Wink and King Britt in the 90s, Crash Course in Science in the 80s…the list is broad and reaches far back. But equally exciting, beyond the DJing / remixing / production realm, is today’s new guard of local electro-performers, bands with beats; a distinction I’m using to encompass everyone from Pink Skull and Instamatic to City Rain and Work Drugs. Joining in under that umbrella is Crozet, the West Deptford, NJ-based synthpop duo of John Helmuth and Sean Lee, who plays Kungfu Necktie tomorrow, opening for Freezepop. I swapped e-mails with Helmuth to get a sense of the band’s roots, its process and its vibe on electronic music writ large.

The Key: What led you to arrive at the sound you have?

John Helmuth:Last year while Sean and I were writing the album, I was finishing up my senior year at UArts while Sean was gutting and rebuilding his house. My daily schedule was pretty crazy at the time. Eating, sleeping, class times, and personal time was all over the place. Sean was insanely busy and stressed out with his house. We barely physically met to write the music. We would just send each other things through email. The sound of both “Alterations” and “We’ll Be Gone By Then” were definitely directly influenced by how we were feeling at that moment of writing. Whether I was super tired and drained from a long day of classes, or wide awake and energetic ready for the weekend, the songs were all over the place mood-wise. A lot of the artists that I was listening to at the time were mostly electronic or at least had some kind of synth playing. Listening to these types of bands really inspired the type of instruments I chose to write with and how I used them. M83 is a huge inspiration as well as Toro Y Moi, Neon Indian, Com Truise, Yo La Tengo, Cass McCombs, and Washed Out. The flow of “We’ll Be Gone By Then” was laid out to feel like a film score which is what I think Sean and I would love to be able to do one day. John Hughes films, Vangelis scores, and the feel from that whole era is what I pull inspiration from. I pay attention to the little details in the music from that era and I’ve been putting a lot of old tracks on repeat trying to replicate things I hear to see how I could transpose a noise I heard, or a short bridge into a full song.

TK: Some of the cuts on We’ll Be Gone By Then feature super-uplifting vocals, others don’t feature vocals at all. How do you decide when a song is going to be instrumental or not?

JH: Deciding between making a song instrumental or not is tough some times. Some songs have super catchy bright guitar parts that don’t leave much room for vocals, but sometimes the synths and guitar tracks are soft enough where I can add a few more melodies to the song by just singing. It really helps to play the songs live at practice to see if I can work vocals into the songs or if the energy of a song is right without any vocals. A few of the songs on the albums had a lot more vocal tracks at first. Its easier to clutter songs up than it is to keep them simple. When we get deep into writing we spend days writing so many different parts for one song and listen back a week later and delete everything we did. If we give each song the right amount of time before releasing them they always seem to come out exactly how we wanted them to originally.

TK: Genre-Jargon Free Association: “IDM” Has this term aged well? How about the music?

JH: I don’t really consider Crozet a true IDM project, but as far as the term goes and how it and the artists in that genre are aging I honestly have never been into it more. I remember the first time I heard a Telefon Tel Aviv track. I was on the way home from a tour with an old band. It was super late and I was in the back seat of a car half asleep and my friend driving started playing “What It Was Will Never Again”. I had never heard an electronic band before that sounded like that. Needless to say I’ve been a huge fan of them and many artists similar to them since that night. I was fortunate enough to see Joshua Eustis at Kung Fu Necktie right after “Immolate Yourself” came out and Charles Cooper had passed. It was an amazing show and the sound was incredible but it felt weird without the both of them up there. There are so many artists out there right now under that genre and I’m always finding myself really impressed by how people can utilize the insane amounts of electronic gear to write music these days. I’m a firm believer that you definitely don’t need $10,000 worth of gear to write music, but it doesn’t hurt! I wrote mostly the whole first two albums with Reason, a $40 Korg 25 key midi controller, and a few crappy 80s keyboards. I’m usually getting my daily dose of IDM and everything electronic over at ISO50.com which is the blog of the man behind the musical project Tycho.

TK: The first thing I heard by Crozet was the Alterations EP. Why did you choose to cover the artists you did? Who would you like to cover in the future?

JH: There really isn’t an explanation why I chose to cover the artists I did. It was one of those things where I was just listening to the original song and wanted to challenge myself to see if I could pull off a cover that brought that song into a different realm than the original track was in. I covered a few other songs that I never released only because the song was too similar to the original. In my opinion, if you’re going to cover or remix a song you really need to pull that song into a different direction than the original was in otherwise you might as well just listen to the original track. The Yo La Tengo cover we did was a lot of fun. I knew right out of the gate that I wanted to make the song more ambient, but build into an upbeat tempo unlike the original. I knew I didn’t want to replicate all of the vocal tracks. The vocals in the song originally performed by Ira Kaplan were so relaxing and smooth that I knew I could use them in the cover to make it more ambient and drawn out. I’m really proud of the way this song came out as well as the other songs, but this is one of those songs where I listened to the intro on repeat for a few hours while doing work late at night and it was really therapeutic. I’ve been thinking about covering some old R&B artists like an Anita Baker or a Chaka Khan, or maybe even a Michael Jackson song to change things up a bit. We gotta keep it fun! I’m in love with a new track by Tomas Barfod called “November Skies” featuring the Swedish singer Nina Kinert. I feel like I could really take the song to a different direction while keeping vocals a prominent piece of the song.

TK: Genre-Jargon Free Association: “Chillwave” Will this term age well? Where do you see the music going?

JH: Ahhh I was waiting for this term to be thrown up haha! The term hasn’t been around for more than a few years now and it’s already feeling old. I don’t see much of a future for the term or many of the bands under the genre. It’s become overpopulated with teenage bedroom artists with Fruity Loops and a reverbed mic. I’m not saying that there aren’t any great bands/artists to come up in this manor, but you can skim through Soundcloud or Bandcamp for hours and hear the same stuff over and over again. I can at least say for Sean and I that we’ve played in all different types of bands over the past 10 years both separately and together and have a good amount of experience writing all different styles of music. Even though Crozet was initially a “bedroom project” there’s a lot more to the writing and creative process than a midi controller and a reverbed mic.

TK: Along the chillwave tip, many of the bands that have been classified as such these past few years are also pegged as “summery” artists. The summer of 2012 is officially upon us. Do you see Crozet as a “summer” band? There is a rollercoaster on a beach on the cover of your album, after all.

JH: I don’t really see Crozet as a “summer” band. I mean I’ll be honest. I listen to my own stuff and there are tracks of ours that I really enjoy listening to during different seasons of the year. There are some tracks we wrote that are great to listen to on long train rides during the winter, and there are some tracks that are great to listen to while driving down the highway at night with the windows down and the volume way up. Both albums took a little over a year to complete so there were plenty of songs that were influenced not only by our moods but the season they were written in. The album artwork for “We’ll Be Gone By Then” was a photo I shot which was included in a series of photos captured with my cell phone during the summer before I graduated. You can view the rest of the series at my portfolio site. I chose that photo because of how strange the photo seemed. Unless you are from the area and know the Wildwood boardwalk then you probably don’t really understand why there’s a roller coaster on a beach with nothing around it. The photo seems to be more like a desert than a beach at first glance. I’ve had a few people ask me, “Why is there a roller coaster in the middle of a desert?” and “Is that in Weird NJ magazine?”. I feel like the photo gives the album some kind of reality to live in. I plan on using my own photography for future albums. The next album cover is not only going to have to represent the music it’s standing for, but its going to have tell a story. It’s purpose is to give the listener a place to be when listening to the album.

TK: What can people expect from your live show on the 23rd?

JH: Our live performance is structured to flow differently than the album does. We mixed both albums together into one long continuous track with unreleased interludes, and a few new tracks that are also unreleased. Again, we try to make the set feel like a film score but fit into a 30-40 minute slot. It’s a lot more work than it sounds. The great thing about our songs is that they are super versatile. Rearranging the set list is actually pretty fun. We’ll hear the songs transition into the next in ways we didn’t hear when we originally wrote them. There’s so many ways to order the songs depending on what type of mood you want the set to be. Eventually I’d love to have some visuals and a few more people on stage to play with us, but until then its just Sean and I.