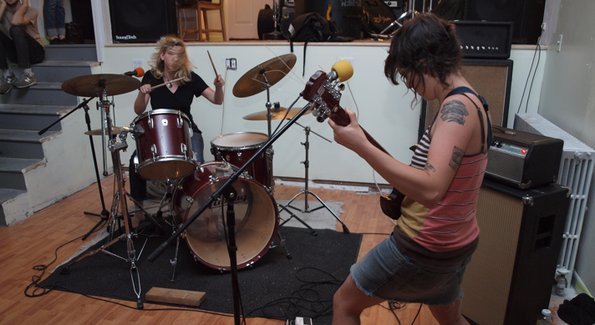 Trophy Wife | Photo by John VetteseThis week, Philadelphia duo Trophy Wife released its sophomore album, Sing What Scares You, on Durham, NC label 307 Knox Records. An emotive nine-song arc of what’s best described as musical essays – exploring broad topics like social change and nonconformity from a feminist and LGBT-conscious perspective – the record’s roots lie in art rock and hardcore punk, at turns recalling early PJ Harvey, Bikini Kill, Fugazi and Converge. So, in short, this is heavy stuff. But it’s not all gloom and doom; there is an undercurrent of hope and empowerment throughout the album, and seeing Trophy Wife perform – as they’ll do tonight at PhilaMOCA – is practically a celebration. I swapped e-mails with singer-guitarist Diane Foglizzo and singer-drummer Katy Otto to learn more about the band, its new album and its perspective on making musical statements.

The Key: There’s a lot of super-evident excitement when Trophy Wife plays live. At the risk of sounding cliché, Diane, you’re a force of nature on guitar and vocals…very intense, very energized. And Katy, you’ve got a rock and roll smile that’s on par with Dean Clean (of The Dead Milkmen) and Billy Zoom (of X)…you always look like you’re having the greatest time hitting your drums. Does it feel odd for you to have such onstage enthusiasm when your songs often tackle heavy topics?

Katy Otto: I am a firm believer in fully committing to joy whenever you feel it. I think we have also realized that we might not always be in the emotional space performing a song that we were when we were writing a song.

Diane Foglizzo: When I catch Katy exuding joy during a set, it totally wins me over. Sometimes I start off right there with her, but other times, with her help, I ease myself into that emotional space. Playing live can be such a bizarre and irrational experience in the way you ask about, John. How do you reconcile actual emotions, authenticity, performance with the state in which you write a song? Thinking about it now, I guess often I don’t have to think about it because the sounds feel pregnant with their intention and memory as well as their potential.

TK: I love your use of counterpoint vocals, and I feel that Sing What Scares You employs them in more ways and places than Patience Fury. It almost seems like a way to reinforce the lyrics, give them greater emphasis? What are some of the reasons you might gravitate towards them?

KO: Probably because we aren’t a “band” in the traditional sense. We are a duet. We have different voices, different perspectives. Our musical relationship is very conversational between guitar and drums, and so it made sense for our vocals to move in that direction.

DF: We do have different voices and perspectives but in many of these moments we’re also sorta saying ‘I got you’. In this band and in our friendship, we need to create and allow for the space to be individuals while recognizing our fundamental need for each other. I’m thrilled about how much more you can hear Katy’s voice on this record. She was super brave and pushed herself to do something that I know felt scary and challenging, but sing what scares you right? Hah!!

TK: It’s interesting to hear the two albums alongside one another. On the one hand, Sing What Scares You feels more musically / structurally straightforward than the Patience Fury – there’s a number of long meditative riffs and passages (like in “Boundaries”) and the vocals overall feel more spacious rather than right up front as they were last time. On the other hand, when you get into it, the album is actually very dense, there’s a lot to dig into both in terms of sound and words. Where do you see it fitting?

KO: It is nerve wracking to make a second record, because you are writing something with a point of comparison and also expectation based on what came before! With this record, we wanted to experiment a little more with dynamics, both instrumentally and vocally. We also wanted to be able to write some lyrics that were more metaphorical, that told stories with imagery and were not as explicit as the first record. It represents a lot of experiences that impacted us both following the release of Patience Fury.

DF: Yeah, I guess it fits into nothing but the time period in which it was written but you know, i think that linear time is totally boring. I went to this movement-based workshop recently about alternatives to linear time, focusing mostly on emergent time. It was totally inspiring! I really want to have a queer relationship to time and space.

TK: Your song “It Gets Better…?” is a very direct response to Tyler Clementi’s suicide, and the title references the nationwide “It Gets Better” campaign that followed. But the ellipses/question mark suggest a bit of skepticism. What are you uncertain about?

KO: I think the idea that just because you move out of high school, oppression and discrimination and really difficult challenges will no longer remain. I worry that part of the message fails to underscore the importance of political action, organizing and resistance. Homophobia is not solely the province of high schoolers who bully. That reality is supported by a culture that is homophobic and encourages that. Also, I want to be clear that our song is not an outright dismissal of the movement. I happen to love Dan Savage. I do think, though, that when you love thinkers you try to critically engage with them. Bell Hooks once said critique is a true expression of love. Hence the question mark. Homophobia is an interlocking puzzle piece in a web of oppressions, and to look at its effects on youth separate of that web is also a bad idea. Hate crimes happen towards adults by other adults. Simply getting older does not necessarily mean that the struggles of what it means to be queer in a homophobic world disappear.

DF: Right on. Also I want to question the idea that passing hate crimes legislation is the solution. There is a problem and we need to deal with it, but criminalization and incarceration, in my opinion, are not the right direction. There are deeper and more nuanced conversations that need to happen.

TK: It’s important to point out that the album, and the band’s perspective in general, is not a negative one. Even though Trophy Wife plays loud songs with minor chords that talk about occasionally dark subjects, there’s a huge positive side to this music. “Dead Composers Dance Alone” is hugely empowering, a call to action almost. Ditto the lyric “may it be in what you seek that you find solace” in “Ariana’s Song.” Do those elements get overlooked when there’s sonic signposts pointing elsewhere?

KO: I hope not. We are in no way attempting to be all doom and gloom. We played a show in DC yesterday, and Diane talked about a desire to reclaim the word “freedom.” Particularly meaningful on 4th of July, I think. I am most attracted to dark, heavy sounds. Adding dynamics and thinking about how we use our voices can help to offset this in ways that make sense.

DF: It feels too simple to suggest that loud and heavy sounds can only indicate certain emotions, like some sort of mainstream narrative about what it looks like to be happy or successful or sad.

TK: The album’s opening track, “Identifiers,” makes a strong point about breaking free from either-or classification, an idea that seems to recur in “Turncoat” at the album’s close. Would you say this is a major theme of Trophy Wife’s?

KO: Yup. I think western society is really hell-bent on dualistic thinking. It’s kind of like this need we have of having someone be “right” in an argument. I think what has been really helpful to me in my own political and creative development has been embracing sentences that begin with “yes, and” or “yes, BUT.” None of us operate in a vacuum. “Identifiers” focuses in part on trans identity, and was inspired by many of our trans friends. Transphobia I think has a lot to do with a fear of border crossing and defiance, and a need to put other people in boxes to understand them. My dear friend just came out as transgender and began her transition very publicly (Laura Jane Grace of the band Against Me!), and in an interview on MTV she talked about how some people might have a problem with the fact that she will go by she but will still have her daughter refer to her as Daddy. This flies in the face of the either/or thinking that I find so problematic, and I loved hearing her say this. I hope it remains a tenet of our band.