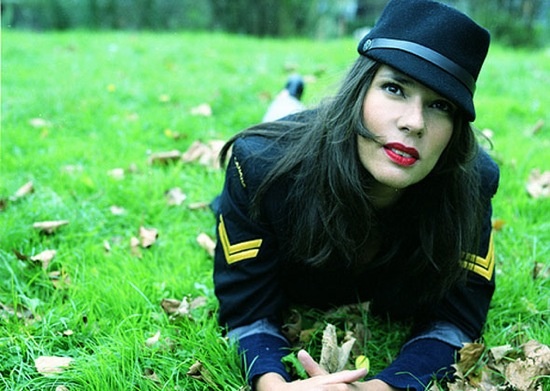 Lætitia Sadier has always produced music at an impressive clip. If her old band, the avant-garde Europop group Stereolab, went more than three years without a new release, it felt like an eternity. But the French-born singer, in town tonight in support of her latest solo record Silencio, sees a downside to this level of creative output.

“It is a problem for me,” Sadier said via phone from her home in England, as she prepared to leave for tour last month. “When you set these self-imposed deadlines and work under pressure, you work in what you know how to do and what works. You have safety nets. And I would like to go – poof! – without safety nets, and explore without any formula or way pre-known ways of how to work.”

In a way, Silencio does sound like a product of the Sadier / Stereolab formula; it’s filled with snappy global pop beats (bossa nova, salsa) and suave loungey textures. There’s no denying her distinctive voice, either – at once warm and deadpan, comforting and detached – or her politically-charged lyrical perspective. These elements  carried across her work with Stereolab for nearly two decades, her side project Monade and collaborations with fellow experimentalists Mouse on Mars, even her 2010 solo debut The Trip. In making this record, Sadier acknowledges returning to the action-driven recording process she’s grown used to – sketching rough demos, fleshing them out quickly and spontaneously in the studio.

“I’ve fallen into the trap again to write in a rush, record very intensively in a short amount of time and record a lot,” she said. “Because that’s what I know! But I would like to slow the process down, and see what I find, you know?”

At the same time, Silencio is a very exploratory record. It offsets vibrant bursts of instrumental energy with solitary spaces. “Lightning Thunderbolt” is a leisurely jazzy number that leads right into the triple-time disco-funk of “Fragment pour le future de l’homme.” Languid opener “The Rule of the Game” slams overindulgent ruling classes to whirring synthesizer drones, while “Ascultation to the Nation” is a global economics screed set to Bacharachian pop. Silencio rides up and down an arc, where we’re used to Sadier’s work riding closer to the middle.

“I wanted it specifically to have variety, not just one monotonous rhythm or monotonous chords,” she said.

Another element that sets the record apart is how, at first blush, it sounds like a band album – real musicians playing real instruments. Sadier is, of course, a real person, as her various collaborators over the years have been. But her music, especially with Stereolab, has always had a highly electronic pulse on first encounter – something which would translate after seeing the band perform into more instrumental associations. Here, it’s instrumental out the gate – a clean electric guitar strumming while another one plays lead on “The Rule,” ringing piano and bongos on “Find Me the Pulse of the Universe.” On closer listen, there are electronic elements – the pattering drum loop on “Moi Sans Zach”, the spacey introduction to “Between Earth and Heaven” – but they somehow feel grounded and naturalistic.

It seems like Sadier may be aiming to blur the lines, to sonically create less distinction between synthetic and organic elements in sound and rather let it exist as music for music’s sake. She said, however, that this wasn’t necessarily the intent.

“You do what you can do, and you do for the most part what you know how to do,” Sadier explains. “And as you work, you progress incrementally towards a different ways of doing things. Records are about capturing an energy, but it’s somehow different from playing live, you don’t have to connect so directly with people. They can listen again and again, and you can go more into details.”

On this tour, Sadier is living out an old dream and performing for the first time in a trio – the lineup onstage at Johnny Brenda’s tonight will be Monade collaborator Julien Casc on bass, James Elkington on drums, and herself on keys and guitar.

“It will be nice not to be alone anymore,” she says. “Although I really enjoyed being on my own up there. I find the triangle a very strong shape, and it will be nice to discover and play with this new dynamic.”

Laetitia Sadier plays with Orca Team and Mikele Edwards of Arc in Round tonight at 9 p.m. at Johnny Brenda’s, 1201 North Frankford Avenue. Admission to the 21+ show is $12, tickets and more information can be found here.