Experimental electronic music label Data Garden celebrated its launch one year ago this weekend by transforming Bartram’s Garden, the botanical garden in West Philadelphia, into an interactive art exhibit called The Switched-On Garden. There were numerous sound installations located throughout the park, and live performances by the musicians whose recordings made up the label’s first releases. This Sunday, to mark its one-year anniversary and to unleash a new batch of albums, Data Garden returns to Bartram’s for The Switched-On Garden 002.

Like last year, the goal is “to explore the relationship between plants, music and technology.” Over a few slices of pizza, Data Garden co-founder Joe Patitucci tries to explain to me what exactly that means. “We want to create an expression of our values that will make a statement about who we are as a label,” he says. “We don’t want to have a traditional record release show at a bar, because that’s not what we’re all about. Instead, we’re creating a place where people can go outside, get together, and experience nature and electronic music at the same time.”

As a label, Data Garden’s first order of business is to practice an environmentally progressive mode of releasing music. CDs and vinyl are out of the question, but Patitucci and co. also understand the fact that humans have a fondness for physical objects. So the challenge is to release music in a way that includes something people can hold in their hands, but also doesn’t bring unnecessary, harmful waste into the world. The solution? Data Garden’s catalog is sold mp3 format, the download code included in seed-paper packaging, and each album includes seed packets. Once the music has been downloaded, the seed paper album art and seed packets can be thrown into the ground and (ideally) a living plant will eventually pop up.

King Britt, the DJ, producer and former Pew Fellow who has worked with Digable Planets and was one half of the electronic duo Saturn Never Sleeps, is one of Sunday’s live performers who has a new album coming out on Data Garden. Titled The Bee & The Stamen, and comparable to the music of Boards of Canada and Tim Hecker, King Britt sonically charts the journey of a bee through the process of pollination. It’s a predominantly contemplative listening experience, adrift with ambient and serene sounds, but as Britt zooms in closer on his subject, the result is often haunted and always captivating.

Also performing on Sunday is Christopher Powell (Man Man, Adventuredrum), who, under the name Spaceship Aloha, is releasing Universe Mahalo: Volume 1. The 10 propulsive, melodic and frantic tunes are the perfect soundtrack to an all-night Maui Luau in the year 3031, where aliens dance with robots and humans dance with holograms. “This project is a personal sonic re-invention of sorts via electronic rhythm boxes, sampled YouTube bright spots, restructured YouTube dregs, environment sound sources, customized synths, and the obsession to start a party with a good beat,” says Powell. “The live show will have elements of structured rhythms and melodic themes that will be improvised and/or re-contextualized on the spot to guarantee moments of discovery for all of us, performer and listener alike.” 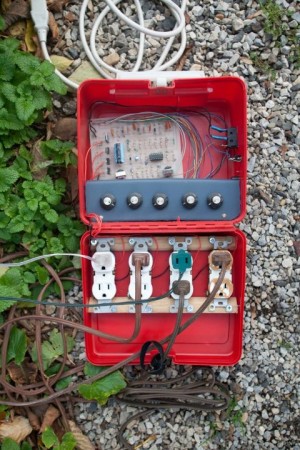 One of the seven so-called “bio-interactive sound installations” that will be spread out across Bartram’s Gardens 46 acres will be Leslie Zacharkow and Kyle Stetz’s “Flora Catalogus.” “It involves outfitting a single tree with an array of hanging speakers and a microphone,” explains Stetz. “As visitors interact with the tree, it will cull their sounds and organize them into an interactive audio collage. We encourage people to talk and sing to the tree, which will then use their voices as food for its own musical exploration.”

That’s what The Switched-On Garden’s all about, namely playing with dominant ideas of nature and technology, and blurring the line between the two. “We want to engage people on multiple levels, and encourage them to have new experiences they won’t have anywhere else,” says Patitucci. “The Switched-On Garden is an environment—a new world—where the sum of all this very strange stuff actually makes sense. All people have to do is be curious.”