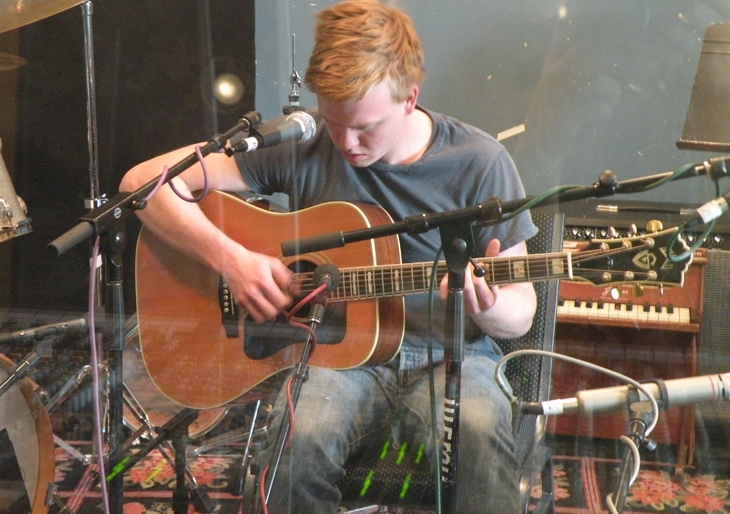 Just a few days after 22-year-old guitarist Daniel Bachman returned to the U.S. from a month-long European tour, he’s sitting across from me on a sunny Saturday afternoon at West Philadelphia’s Local 44. Still suffering from jet lag, and nursing a hangover from a wedding in New Jersey he attended the previous night, he’s wearing the same pair of jeans, the only pair of pants, he took with him on tour. He proudly points out that he has since washed them, but there was no time for laundry during his first trip to Europe. Nasty slacks and road dirt, though, aren’t the worst thing that happened to Bachman overseas.

Nothing too terrible went down, but something strange happened in Barcelona. He played a venue below an apartment complex where the residents are notorious for throwing various things down at showgoers, hoping to shut them up. “Someone told me they sometimes throw pieces of metal down,” says Bachman, laughing at the absurd prospect. “The night I played, they were throwing water balloons, and one of them hit me. This dude said sometimes they pee in them, and sometimes they put bleach in the balloons. Whatever was in it, when I woke up the next morning the whole right side of my face was red, swollen and on fire. My eye was throbbing for 10 hours. That really sucked.”

Bachman’s fine now. He’s home. But home’s no longer Philadelphia, where he lived and worked for the past year. Just weeks before the tour, he moved back to his hometown of Fredericksburg, Va., a small city that sits between Richmond and Washington, D.C. “I would’ve stayed in Philly longer,” he says, “but I didn’t have enough money.” He will, however, be returning to Philadelphia for two concerts in the near future, first at Little Berlin on October 24, and then at Brickbat Books on November 17.

Considering that so much of Bachman’s music is inspired by Fredericksburg, it makes sense that he’d go back. Released under the name Sacred Harp, his first recording was titled Apparitions at the Kenmore Plantation, a reference to the Fredericksburg home of George Washington’s sister Betty Washington. Since then, Bachman has been recording under his own name—releasing cassettes and LPs on small labels like Debacle and One Kind Favor—and consistently dropping references to Virginia.

Seven Pines, out earlier this month on Tompkins Square, is Bachman’s debut album for the label, which specializes in a diverse range of archival American folk musics. And, as always, references to the Fredericksburg area abound: “Old Rag” is named after the Shenandoah mountain Bachman often hikes; “218 to Caledon” references a street in King George County; “Copperhead” is named after the venomous snake that makes frequent, untimely appearances across the area.

“I had a really good childhood in Fredericksburg,” reminisces Bachman. “I had a really fun time there, and it just feels like a very safe place. I’d just ride around on bikes with my friends all day in the woods. If I had to stop playing music and live there forever, I’d be happy. I don’t fear change or uncertainty, but it’s nice to have something always be the same. My friends’ porches will always be there, and they’ll always be drinking beer on them, no matter what happens everywhere else.”

Bachman’s acoustic guitar technique has earned him comparisons to guitarists like John Fahey, Jack Rose, Sandy Bull and Robbie Basho, all of which are connected to the American Primitivism persuasion, which brings a modern experimental spirit to traditional country, blues and folk guitar playing. While these comparisons are appropriate, placing Bachman alongside such legendary figures has consequently overshadowed his work, stifling his attempts at finding his own voice.

“I understand why the comparisons are there,” he says, “but I don’t think they’re right. I’m not on their level as a player, or professionally. Those guys are pros, man. But I think I’m getting to be a better player, and I’m learning new tricks that I couldn’t do before. And I’m more confident now that the ideas are my own. I worked harder on this record, much harder than on anything I’ve done in the past. It’s representative of where I’m at right now—no more, no less—this album’s what I’m physically capable of doing at the moment.”

Seven Pines is undoubtedly Bachman’s strongest recording yet. But he’s still very self-critical, especially of his playing’s expressiveness. “Long Night 1,” which appears on Seven Pines, is a cover of a song by Loren Connors, whom Bachman sees as a guitarist capable of reaching, and, most importantly, articulating, superb emotional heights.

“Connors plays the way he feels,” says Bachman. “Even though I want to be able to do that—to play more emotionally—I can’t do it right now for some reason. At least I can’t record that right now. When Loren plays, it sounds like he’s ripping the guts out of the guitar, like he’s just miserable, and in pain. My biggest flaw is that I think my music is too technical, and not emotional as it needs to be. That’s what I’m working on right now.”