Dream Songs, med school, and making the most out of time: A conversation with Jeffrey Lewis - WXPN 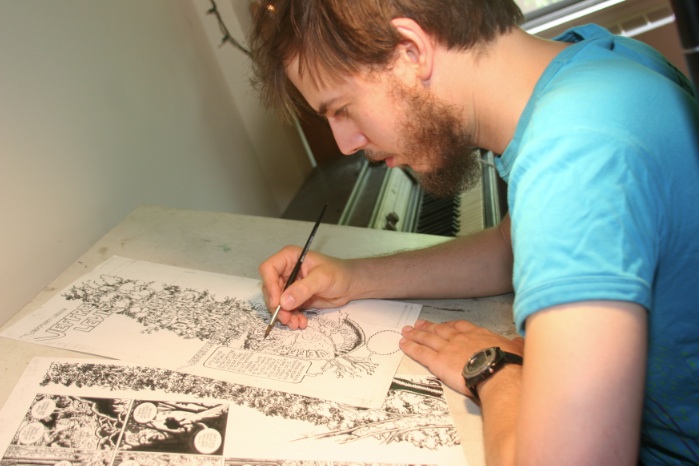 Dream Songs, med school, and making the most out of time: A conversation with Jeffrey Lewis

“Honestly, I usually can’t even think about it until I’m actually there doing it…there are so many other things that need to be done beforehand,” he explains when I ring him up Tuesday night, a week before his U.S. tour. “Right now for instance I’m finishing up a comic book about Woody Guthrie,” he adds, “and then I have to mail posters out for the upcoming tour, so I’m licking envelopes. And then at the same time I’m stressed about the current election…I’m hosting a debate-watching party at my apartment this evening. So hitting the road hasn’t even entered my mind yet.”

It’s not surprising coming from Lewis, a restless creative type whose impressive oeuvre of songs, drawings, and comic books made him a cult figure among Manhattan’s anti-folk scene in the late 1990s, and has attracted thousands of fans worldwide. Never one to rest on his laurels, the 36-year-old New Yorker—whose 2011 record A Turn in the Dream Songs won acclaim for its catchy melodies and unique perspective on life and love—is now hitting the road again, playing 30 cities in 31 days.

But Lewis hardly seems fazed by his touring schedule or his success. In fact, the singer (who considers himself an “artist first”) views his songwriting as a stroke of luck. “For me, music and song-writing are both very inspiration–based. Like, if I’m very lucky I can come up with something that I think is good…whereas with art, I know how to do it. If presented with a blank canvas, I know how to create an illustration.” He pauses. “But I’ve been doing both for so long now that they’re pretty mixed up and scrambled.”

“Sometimes I come up with an idea and I don’t know whether it will become a song or a comic…I’ll just jot it down in my notebook, then abandon it for a while,” he continues. “It all comes out of one pile of scribbled ideas.”

Lewis’s openness to trying new things is key to his continued evolution and success—whether it be creating drawings that complement his songs, or even attempting to illustrate songs live, as he did during one tour in Italy. (“The thing is I’m not a particularly fast drawer,” he explains, when I ask why this plan was abandoned.) For recent record Dream Songs, that meant allowing friends and colleagues (including The Wave Pictures’ Franic Rozycki, plus members of The Vaselines, Dr. Dog, Au Revoir Simone, and more) to come in and improvise during the recording process—an experiment that turned out remarkably well.

“I almost had an open door policy for that period,” describes Lewis, explaining that, “we recorded the whole thing in about a week and different friends and musicians I knew just kinda came by and added different things, different instruments—mandolin, flute—without a real plan. In some cases the things that they improvised worked so well that they’ve become parts of the songs. For example, the mandolin part on ‘I Get Lost’ that Franic [Rozycki] came up with on the spot…we play that part live every time. And the recorder and flute on ‘Time Trades’ my friend Lucy [Baines, of Misty’s Big Adventure] just played in the studio—I liked the melodies she came up with so much that they’ve become part of the song.”

But if the melodies are open to interpretation, the song themselves—and the ideas behind them—are pure Jeffrey. In fact, you could argue that it’s the singer’s whimsical, sardonic voice and unique perspective that set him apart the most. On Dream Songs, there are plenty of quirky, catchy nuggets: from upbeat rocker “Cult Boyfriend,” in which Lewis compares himself to The Misfits and Meet the Feebles (“If there’s such a thing as a cult band or a cult movie, I can be a cult boyfriend,” he argues), to “Kongru Green Slime,” a word-y, 6-minute musing on consumerism and slime. But the record’s thematic center is “Time Trades,” a playful, musical discourse that explores the idea that if we are indebted to time, we might as well use it to become really great at something.

“I’m always in a panic about time going by and feeling like my life is almost over already…and actually, I’ve felt this way for as long as I can remember,” explains Lewis, when I ask where the idea for the tune came from. “I remember being 10 years old and being like ‘Oh no, I’m in the double digits now.’ All through my life it’s this panic. But then at a certain point the idea struck me that if time is really flying by, that means I can be better at stuff that much faster. So if it takes 5 years to learn to play an instrument…then cool, 5 years will just fly by! It’s the positive way to look at it,” he says.

“But then on the other hand,” Lewis continues, weighing it out as we speak, “I also feel like I should wait longer to do anything that will take a lot of time. Like if I went to medical school in my 20’s, and it took 8 years to become a surgeon…it would feel like it took more time than if I waited until I was in my 40’s. Then it would feel like it flew by.” I can feel him grinning over the line. “So maybe all this pressure we feel to do stuff right now…we should just wait until we’re older and we’ll be able to do things faster.”

Easy advice from a man who is already accomplished in two fields—but Lewis might be on to something. He doesn’t discount the idea that he might indeed go to med school in his 40’s (“And when I’m 50 I can become a lawyer and do that really fast too,” he jokes), just as he doesn’t assume he’ll still be touring 10 years from now.

“It seems like a lucky and miraculous miracle that I’ve gone this long without people losing interest,” he admits. “Not many artists even get 10 years in this business so I’m just content for the time I’ve had.”

As for continuing to write songs—as long as Lewis’s pile of “scribbled ideas” continues to flourish, he knows he’ll be able to keep creating, regardless of whether anyone is listening.

“There’s so much to write about in the world—you just don’t have enough time to cover all the thoughts and feelings and observations that are out there,” he remarks. “It always seems like continuing on depends on whether I can come up with something that I feel is important enough that people will want to listen. And that I simply cannot predict.”

Jeffrey Lewis plays the World Café Live, 3025 Walnut Street, Thursday, October 25 with Birdie Busch. The all-ages show begins at 8:00 p.m. and admission is $8; more information can be found at the venue’s website.