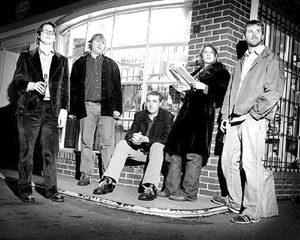 There’s been a lot of excitement for Philly bands circa late 90s / early aughts in the past week. First there was The Low Road’s reunion at The Tin Angel, then there was the announcement that B.C. Camplight will be releasing a new album in early 2013. Now we hear that The Trouble With Sweeney – the rock and roll combo fronted by then-Philadelphia Weekly writer, now-Philebrity editor Joey Sweeney – is reuniting for an appearance at Johnny Brenda’s on Saturday, December 8. Capping off a night they’re calling “JOEY SWEENEY YOUR LIFE IS CALLING: The Best Of Joey Sweeney, 1992-2012,” Jojo’s current band Arctic Splash is also on the bill, along with The Barnabys, the group he started at age 17, and Bitter Bitter Weeks, the band fronted by Philly uber-producer (and Sweeney’s friend) Brian McTear. The whole night is in celebration of Joey’s 40th brithday, and tickets and information on the show (party? happening?) are available at the venue’s website. Below, listen to “The Break Up,” the melancholic-poppy opening track from The Trouble’s 2002 LP I Know You Destroy.