Interview: Designing sound walks with The Mural and the Mint's Michael Kiley - WXPN 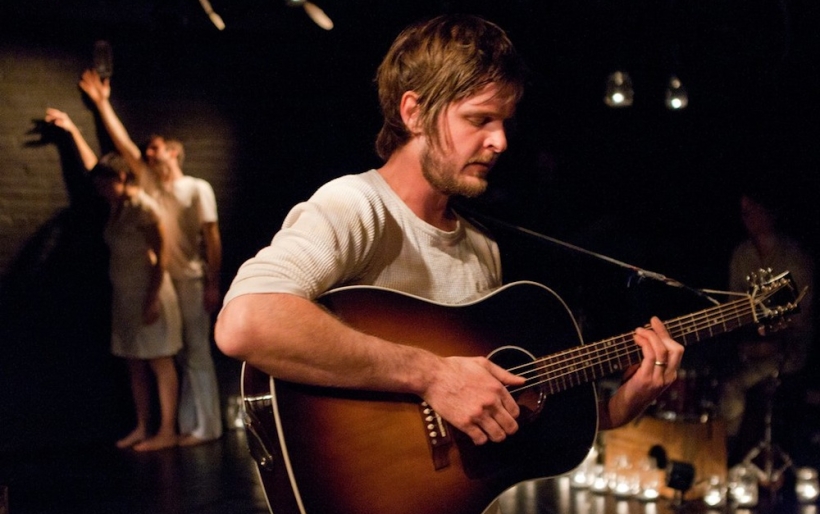 Interview: Designing sound walks with The Mural and the Mint’s Michael Kiley

The longer Michael Kiley is involved in the Phildelphia music scene, the more he becomes involved in the Philly arts scene. After playing in the more straight-ahead indie rock band Cordaline in the earlier part of the aughts, he founded The Mural and The Mint in 2007 as a way to make poppy music outside of industry convention. All of the band’s albums are available as free downloads (and CDs-for-donation when it performs), and with each release, it stretches both its sonic palette as well as its ambition for how the songs can exist outside of recordings. 2010’s As The Eyes of the Seahorse was performed with a companion dance / performance production (pictured), and The Mural and the Mint’s current project – The Rittenhouse Square Sound Walk – will debut in the spring. Using GPS-powered mobile phone apps, users will be able to hear different sounds as they wander through different corners of the center city park, which will ultimately layer and bloom into a full song. The Kickstarter for the Sound Walk just met its initial goal of $2,200, with five days still remaining in the fundraising campaign – and the extra time is good, since Rittenhouse is just phase one of the project. Kiley and I caught up over the phone yesterday to talk about creating soundtracks to people’s strolls, and how it could potentially connect different regions of the city.

The Key: It’s great how The Mural and The Mint keeps venturing beyond pop songs into performing arts and other experimental ventures. Why do you think this is?

Michael Kiley: Well, the whole project came as a reaction against the normal “get a band together, play the club scene” arc that a lot of people are surprisingly still trying to take. I’m trying to write music, have more stability, and I’m constantly trying to think outside the realm of what a pop band might do. I work pretty extensively as a sound designer for theater and dance in Philly, and that work as a designer has informed this project a lot. So I thought about ways to design people’s walks – what would I play for people as they walk through a certain place. How could I make that exciting and new? Then I stumbled upon the GPS idea, called (design firm) Punk Avenue, and found out that projects like this have been done before. But I’m excited to bring my experience as a designer, and a songwriter to it. A lot of projects that use this technology are overly didactic, or obtuse to the listener. What I’m trying to do is bring pop music into the realm. It’s one of only uses of smart phone where you put your phone away – the technology is in use, but you’re not sucked into it. You’re left to have this emotional experience while you’re [passively] controlling it.

TK: The description of this piece immediately reminded me of Phil Klein’s Unsilent Night, which I saw performed in and around Rittenhouse in 2010. At that event, the audience carried the music with them – in boombox form – around the neighborhood. Here, the audience is also kind of carrying music, but the music changes as they move – and it’s not even an event per se. People can download the app and use it whenever. Am I understanding that correctly?

MK: Yeah, you can do it any time. It will be a permanent installation, as long as the app is online. Our hope is to keep it small enough that you can download it instantly upon arrival. This is the first [sound walk] in a larger project – I hope to continue to get funding for it and develop it into an eight- or ten-site project. The reason I chose Rittenhouse for this first one is because 10,000 people walk through it every day, and most of them have smart phones. So it’s not just an aesthetic opportunity, but hopefully it will create a large community that will hopefully go on to follow the project, and I can then bring them to other parts of the city where it will hopefully generate economic opportunities, bring attention to other areas that need attention. If the Reading Viaduct gets approved, that will be next on my list.

TK: Have you worked with the city parks department on this, or did you want to get the first sound walk in place before going to them?

MK: It’s difficult to get attention for something people cant experience yet. I was fortunate enough to get a large chunk of funding to start this initial one, and hopefully that will open doors to talk to other organizations, and talk to the city about it. I’ve had conversations with with Friends of Rittenhouse, the Fairmount Park Commission, about possibly getting get signage in park [about the sound walk]. I’m also hoping to partner with organizations nearby the site to check out rental devices – which would open it up for more people to experience it, who don’t have smart phones.

TK: Obviously, there’s the potential for people to experience the piece in different ways, depending on how they move around Rittenhouse. Will this be a guided walk, or is the audience free to find their own way?

MK: I want to stay out of it as much as I can, I want to try and remove myself from it as much as possible, not having a map, even suggestions. To give you an idea how it might work, when you think about Rittenhouse, you enter at a corner, and usually head right for the center. So I’m thinking about people’s walk toward the middle as an unearthing, a birthing of a song. If you were to just walk around the perimeter, you would be experiencing some sort of ambient sound, and as you walk closer, you’d hear more composed ideas. Beats would start to form; a melodic idea would be introduced. And then once you get to the center, the entire song would kick in. But because I don’t want people to start it and lose it, once the song begins, it takes dominance over everything, no matter where you’re walking.

TK: You’ve got quite a lineup of collaborators on board for the project. Tell me about them.

MK: Eliza Jones [of Buried Beds] has been a part of just about everything I’ve done under this name. She’s kind of who I go to first, so she’s of course going to play a huge role in it, in the recording. Chris Ward [of Pattern is Movement] is going to play drums, Matt Ricchini [of Arc in Round] is also going to  play percussion, sampling, maybe he’ll sing a little bit. The four of us are going to go into Miner Street Studio, knock this out the last week of November. – Jon Low is going to engineer and produce it.

TK: The song was actually written in the park?

MK: Yes. I walked around with earphone stereo microphones – they set in your ear, like earbuds, but they record sound as you’re hearing it. So I walked around and recorded, and then went back and listened to see what was interesting. It was a lot of people sounds, but also a bus ramping up its gears as it pulled away, and bike spokes rattling. So I worked on it on, edited it, and rhythmic and melodic ideas began to emerge. Those ideas a large part of what people will hear. I’m made the bass line from the bus, I created loops, and I’m going to have the musicians to play to those loops. And then I’ll go back and layer their recording into the original ideas I made.

TK: Your Kickstarter mentions bigger plans, for both other artists as well as non-musicians. How would you picture a non-musician interacting with it?

MK: My hope is the more funding I get, the more I can give to these app developers to do more with the project. The larger, way-out goal is, as we develop technology and make the app function better, eventually we can turn it into a user-friendly interface – it would be a program, and you would insert your mapping points via a google map, upload your mp3s to launch that point. And you’d assign how you want it to function – should one song fade up and the other fade down, would one have dominance like we talked about? I would love it if there were 500 different Rittenhouse Square sound walks. Or for other places too. Musicians could wake up one day and say “I’m going to write a song for walking the race street pier,” but it could also be for people who don’t make their own music. They could upload songs and make a sound walk for their anniversary – or the Art Museum could make a John Cage sound walking up the Parkway and the steps to their exhibit. Because sound is a design element that is not visual, it has the ability be layered over top of so much of what we do.