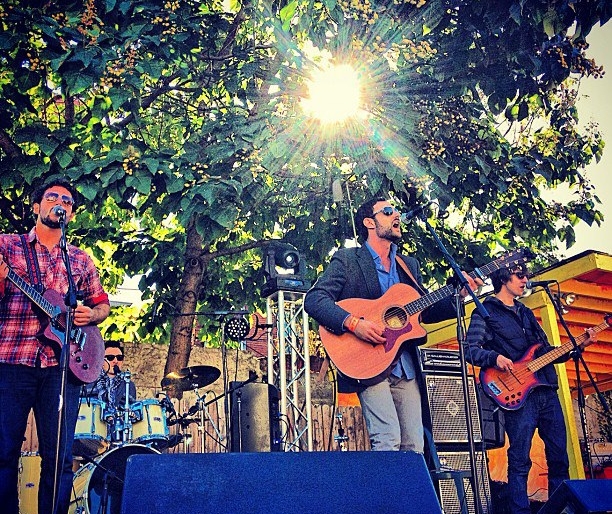 They may be sneaking their debut full-length Trains and Aeroplanes quietly in during the last week of the year, but really, it’s just setting Modern Inventors up for a great 2013. The band had been plugging away this year, covering McCartney songs and appearing on the air with Helen Leicht, opening shows for Ben Solee at the TLA and Cliff Hills at World Cafe Live at the Queen, and sneaking up to Brooklyn for a Backyard Brunch session.With the album out, we get to hear the full range of a group that started out as a collaboration between singer-songwriters Matt Kass and Josh Benus. I caught up with Kass over e-mail today to get the details on Trains and Aeroplanes and more.

The Key: You perform often as an acoustic duo or trio, but the album has a lot of range – there’s big rock moments that might be unexpected, depending on how people were introduced to the Modern Inventors. Did you want the record to stretch your sound, or was the bigger rock-ness always in the cards?

Matt Kass: I think we’ve always wanted to have a full band, and the duo and trio thing is just a way for us to perform in situations where a band normally wouldn’t be appropriate. It’s great for support sets, because we can come in and play in whatever configuration the headliner wants. But ultimately, when we’re writing these songs, we’re thinking of the full band arrangement. I think as we play more and do more of our own shows, you’ll find us playing with a full band.

TK: You and Josh originally began working together because you were going to produce his solo record. How did it turn into a new band? Was there a moment in the studio where it “clicked?”

MK: Well, Josh and I have known each other for like 6 years now. He played in a band that used to open for my old band, The Brakes when we would play in New England. He came to a Brakes show at Mercury Lounge in 2008 and asked me to produce his solo record. I liked the idea, and I could tell my band was winding down, so I jumped at the chance to make his record.

We went into the studio under the assumption that this was going to be a solo record, but as we started writing and recording, it became clear to me that this could be more than just a producing thing. The songs that he was writing, and the direction we were taking the project became very similar to the sound I had in my head….I had a feeling from very early on that this would turn into something more, but I don’t feel I was ready at the time to jump head first back into a band. I think maybe it clicked for me when he moved down to Philly, after that it started to feel like a real thing.

TK: Who rounds out the Inventors and how did they come into the fold?

MK: Well at its core it’s just Josh and I, but we’re lucky to have some really talented friends who want to play with us. If you look at the liner notes, there’s at least 20 other musicians besides the two of us that play on the record. It’s kind of crazy…

Someone who’s been with us on and off since basically the beginning is Zach Djanikian. Zach was the lead singer and bass player in The Brakes and I’ve known him since we were like 12. I had him play bass on Josh’s first solo recordings and he helped us record the Paul McCartney cover.

We also have Will Wright and Tom Spiker play bass, Will is a great young player, and Tom owns the studio that where we do most of our recording. Tom is pretty involved in our recording process too, I don’t think we would have been able to release the record without him.

Tonight we have Dave Streim playing keyboards, and Matt Scarano playing drums. Dave grew up in Lower Merion with Zach and I, and we knew each other from playing in Jazz band and stuff, and I met Matt when I was playing guitar for Ross Bellenoit. They’re both incredibly talented players. We also have some friends from NYC play with us too, Spence Cohen who played in the last iteration of The Brakes and Mike Riddleberger who was in Quintus and Krystle Warren & The Faculty with Zach.

At the risk of sounding pretentious, I think the over arching theme is that we really wanted to associate our selves with people who are genuine and real, being talented is a prerequisite. There is so much bullshit in this industry, that if you don’t surround yourself with people that you want to pick up the phone and call, then I think you’re going to eventually start hating what you do. In that sense, we’ve been really fortunate so far.

TK: There’s an undercurrent of soul in your sound, whether it’s on the singer-songwriter side or the rock side – especially when it comes to the harmonies. How did soul music in general (or Philly soul in specific) shape your suond?

MK: Hmm, I haven’t really thought of it until now. Josh’s voice has a lot of range to it, and I know he listens to a bunch of Sam Cooke and Otis Redding. We do some old soul covers when we’re playing as a duo, for fun…maybe it’s crept into the music through that? Otherwise, I’ve been watching a lot of ‘Daryl’s House’ on TV lately. thats about it.

TK: What can we expect from your album release at JBs tonight?

MK: Well, tonight is our first headlining show in Philly, and its the album release…so we’ll play a bunch of songs off the record, and some newer ones that nobody knows yet. We’ve got a few surprises, some special guests, we’ve had a lot of requests to play the McCartney cover. That may or may not happen…

I’m also really excited that Hezekiah Jones and Shark Tape said yes playing with us. I’ve known Raph for a while, his songs are so understated and powerful. I’m a big fan, plus he’s the only other dude in Philly that plays guitar left handed and upside down! I first heard Shark Tape one day on XPN while I was driving around town, and really dug it. I got in touch with them through Dan Reed, and we’re excited to have em! Oh, and our record is going to $5 tonight only. I think there are still some tickets left as of now.

Modern Inventors play with Hezekiah Jones and Shark Tape tonight at Johnny Brenda’s. Tickets to the 21+ show are $10 and available here.