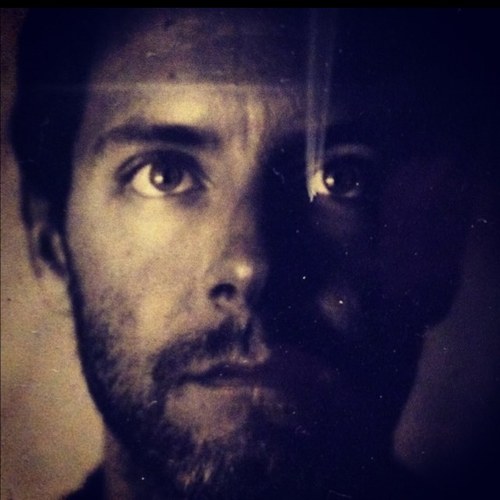 Interview: Nightlands’ Dave Hartley on sci-fi, sinkholes, and how when you really get down to it, the music biz is all one big “book of friends”

Oak Island is not just the title of Nightlands’ new record. It’s also an island off the South shore of Nova Scotia, imbued with mythical proportions. First discovered in 1795, it’s home to a mysterious pit, in which explorers found strange pick markings and layers of logs. The discovery sparked rumors that the pit housed treasure, and for years afterwards, explorers sailed to Oak Island and continued to dig, hoping to unearth the pit’s secret.

These days, scientists believe the phenomenon was likely caused by a sinkhole—although excavation groups today still continue to explore. When I ask Nightlands’ Dave Hartley how the tale relates to his new record, he tells me he’s drawn to the idea of “mystery without end.” “I think mystery is important in art,” he continues, over coffee at Kensington’s Leotah’s Place. “On record, I never let my voice be alone. I always cloak it in millions of itself. Maybe that’s an attempt to keep the mystery going…because the human ear always wants to hear a single voice. And I feel like I’m always pulling it away, dangling the carrot.”

Thick, echo-y, vocal layers are one key element of Nightlands, a solo project started a few years back by Hartley, most known for his role as bassist with The War on Drugs. As Nightlands, he boasts two records of complex, moving synth pop: 2010’s Forget the Mantra, and Oak Island, out this week on Secretly Canadian.

Compared to Mantra, which felt dreamy and dense, Hartley describes Oak Islandas “more confident.” “It’s an evolution,” he adds, calling it the “next step” in an ever-changing musical journey.

The album was recorded fastidiously by Hartley, and mixed by Brian McTear. And while it features a slew of collaborators, Hartley states that the vision is solely his own. “I’m very autocratic,” he explains frankly. “And that’s fine, because I’ve collaborated my whole life with other people. This is the one place where I want to call the shots.”

In addition to playing bass with The War on Drugs, Hartley’s played and toured with Sondre Lerche and recorded with Sharon Van Etten, in addition to lending a hand (or a voice) to countless other projects. These different experiences have shaped his process, and opened him up to the possibilities for creation.

“The thing I’ve learned [from working with all these people] is that there’s every way of doing something,” he says, delving into the details. “Sondre, for example, is a true craftsman when it comes to songwriting. He’s diligent, and approaches it like an old school, Brill-Building artisan. And that’s his way.” He pauses. “Sharon, on the other hand, is just this bleeding heart. She’s all emotion, and she’ll show you her vulnerability in this way that will disarm you. And that’s her way.” He pauses again. “And Adam [Granduciel, of The War on Drugs] is way more guarded. He won’t show you that vulnerability—but he will find one chord that makes you feel something. And he’ll put his foot on that pedal, and just explore it.” He grins.

As for Hartley’s own process, he admits he approaches it “more like a scientist.”  “I’ll start early in the day, and I’ll go for 8 hours. I think of it as a lab,” he adds, noting that he comes from a family of scientists and is a bit of a black sheep due to his decision to pursue music.

Luckily, when it comes to recording, a scientist’s meticulous approach can be useful—especially when collaging together dozens of independent pieces.

“I played probably 98% of the instruments on the record,” says Hartley, whose previously noted “autocratic” mentality is a point of pride. “I’m very isolationist when I record—which actually I love—because when you’re isolated you can make some really strange things. But there are other people that play on it too. It’s a fun way to gauge people’s responses.”

Contributors on Oak Island include Granduciel and (The War on Drugs’) Robbie Bennett, plus Eric Slick (Dr. Dog, Norwegian Arms), Michael Johnson (Ape School), and many other local musicians and friends.

“It’s a very thick record, so even though I played most of the instruments, there was still a lot of room for collaborators,” says Hartley, adding that the record features myriad vocalists in particular. “Honestly, what I’d do [when recording] was invite a friend over to come listen to what I was working on and see what they thought. Then I’d be like, ‘hey, you should sing on it.’” He smiles. “It’s funny how the music business, as you go along, just becomes this big book of friends. It really is a business of relationships and friendships. You just couldn’t be successful if you’re not a likeable person.”

Hartley will celebrate Oak Island’s release this Saturday, January 26 at Kung Fu Necktie, before hitting the road with Efterklang in mid-February. Adapting his songs for live performance is a constant challenge, but one that Hartley “refuses to let influence how I record.”

“The advantage [of tour] is no one knows my band really. So I’m not greeting this expectation,” he says, adding that the focus will be more on vocals and vocal harmonies. “For the last record, I got really tangled up in technology—trying to recreate everything with samplers, and vocal harmonizers, and all these synthesizers—and this time I was just like, I want to get some people who sing really well, and we’ll just sing together,” says Hartley, who’s bringing along Eliza Jones (of Buried Beds) and Jesse Moore (of Auctioneer/Ladies Auxiliary). “If you have that foundation, it’s gonna be fine.”

Other plans include recording a new War on Drugs record in February (“Adam’s new songs are stellar,” says Hartley) and delving into hobbies such as basketball, science fiction, and running, because “life is short, and everything is interesting.” Music however, remains number one.

“I’m lucky enough that I haven’t had a job outside of music for a few years…it’s hard,” he says, sipping his drink. “I’ve been working towards this my whole life.”

Still, if all musical avenues tank, Hartley admits he has a secret back-up plan:

“I may seclude myself and try to write a science fiction novel,” he says with a grin. “I have a lot of ideas, and it’s something I always wanted to do.”

Nightlands play Kung Fu Necktie at 7:30 p.m. on Saturday, January 26. Tickets for the 21+ show are $10; more information is available here.