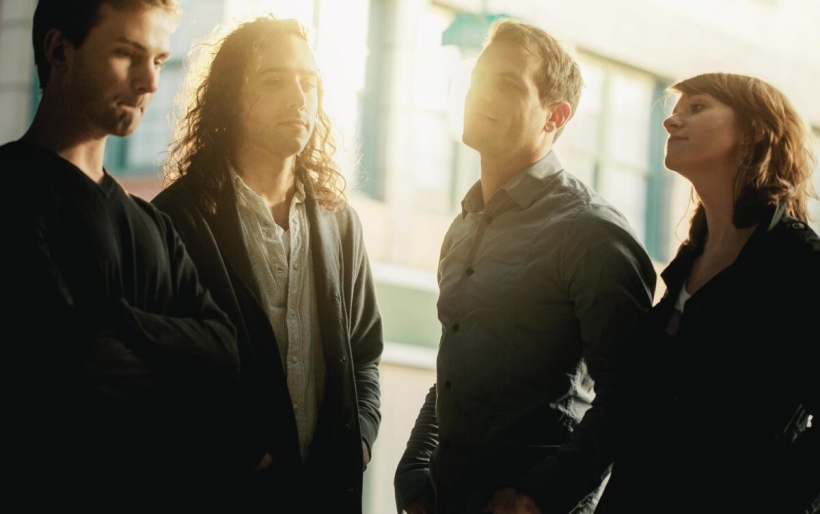 Three-fourths of The National Rifle are gathered ’round a table at XPN Studios, scrambling on smart phones to find thank-you videos they made for their Kickstarter backers. In one, drummer Buddy Mazzenga rolls around Scrooge McDuck-style on a pile of donated money. In another, bassist Jeremiah Sweeney dances to Duran Duran’s “Hungry Like the Wolf.” For as much as their new album Almost Endless – which we’ve explored all week on Unlocked – finds the band in more serious, contemplative territory than we’ve heard from them before, they’re the same goofy group of players we’ve watched for the past six years. After some laughs, we got collectively focused and talked about a few things – the process of self-discovery that went into this album, the transportive power of synthesizer tones and how personality (which they have no shortage of) goes a long way, but solid songs go even further.

The Key: When you perform, your personality does come across in your live show. I like that you’re taking the extra step further with these personalized videos. How did you realize that your fans would respond like that?

Hugh Moretta: It’s because we really try to talk to everybody at shows, we’re not shy about it. We hang out with everybody that comes, so they all kind of know our personalities. It’s almost like inside joke stuff…they get it, they know our sense of humor, we know how they are.

Jeremiah Sweeney: We’re really close with all our fans. We talk to them every day on our Facebook, they even text us.

HM: There’s a few people in Philly, but it’s mostly people on the road. Texas specifically.

Lynna Stancato: Yeah, for some reason, we have this group of fans in Texas. We have a really good draw in Dallas, and in Austin too. And they, after we played there a couple times and there’s a group of people who like clung on to us. And because we’re not shy people, when we’re on the road, too, we’re gonna hang out, you know? Where else are we gonna go?

TK: You need something to do!

LS: I think that’s why you become closer with people you meet on the road. You need to make friends to places to stay, to make connections, to meet people when you’re in a town you don’t know. So we find ourselves hanging out more at shows – we do in Philly too – but we see these Philly people all the time, ’cause we live here. So I think when we did the Kickstarter and when we were thinking of the rewards we want to give, we tried to think of what the people would like. We knew they would like a funny video, especially the people who hang out with us in Texas.

JS: I think the overall thing is we’re a friendly band. And people cling on to that. And I think with the new album, we didn’t want to so much step away from being a friendly band, but we wanted people to like us and come out to our shows for the music and not just for our live performance and to hang out with us.

LS: People always tell us that they like us as people. But…

LS: Yeah! Are you attracted to our music? That’s how you met us, because we’re a band, because we played a show, we hope that you like our also like our music, not just because we’re fun to hang out with. Our main goal is for you to like our music too. I mean, that wasn’t the main drive behind the album, but it was something we hoped for. I said this a lot – we don’t want to be a party band anymore.

TK: You did two things with the album – one, it’s not an EP, it’s your first album. And production-wise, you really stepped up your game. Is that why?

HM: The production part isn’t as much up to us. In the past, it was really been what we could afford. Which is part of the reason we had to do the Kickstarter this time. And it was like that – if we’re going to do a full-length, we’re going to spend a lot of money on it. But you can spend a lot of money for crap too, that’s the thing. But luckily it worked out. Mainly because of where we went, and because of Jon and Brian at Miner Street.

LS: Probably the best decision we ever made.

HM: And Jon had the most to do with it. Brian is a great guy and they definitely share the same passion and same ideas about production. And Jon especially took it to another level. Any success this album has, I will attribute to Jon.

JS: He really created an awesome work environment. He was very laid back, really open to trying different sounds. We kicked off an awesome relationship right from the beginning.

LS: He doesn’t just take what you’re doing and press record. For example – I would show up and have a synth sound in mind for a certain song. I’d play it, and he would be like “we can tweak this, I can make this a better sound.” In the past places, they’d say “oh, that’s what you want, we’ll put it on, you’re good.” He’d listen to it with the rest of what’s done and say if he thought it didn’t go. And we’d sit there with the Juno and tweak and tweak until we made the perfect sound. We would spend a half hour making the perfect sound, and I’d never experienced that before at other places where it was up to me. I felt for once like we’d worked with a real producer.

TK: You moved to a really synth oriented sound on this record. Not that there aren’t rockers like “Street Burn” – you mix it up. But when you first decided to move in that direction, did you know you’d take it this far?

HM: There was a vision, I think. I was really interested in electronic music at that time, I still am. The thing that’s weird is with there wasn’t really that much of a goal with this album. Which is kind of crazy. [laughs]

JS: Well, there was. We wanted it to have a flow, and have emotion, and be an experience when you listen.

LS: But that’s the goal with any album.

TK: But when you’ve just done EPs before…

JS: Exactly. An EP is just five songs, whatever. You put them out there But we actually spent time figuring out how to make this album tie together.

HM: But one thing we definitely took from Jon is thinking about the end result of a song before you start writing. We didn’t do that before. We didn’t even really do it with Almost Endless. Thinking back on the process, it was more “I like this guitar riff, let’s see what kind of song it makes.” And this experience helped understand what kind of band we are, what kind of songwriter I am, and what we want. I don’t think any of us knew. That’s why everything is so different from before. Maybe for all five years before we recorded, I just don’t think we knew.

HM: I learned that the things I value – and it’s based on a lot of pop music things – are melody and movement of the melody, and transition. People would say they’re hooks, but it’s more like unexpected turns of events within the song, but still staying within a pop structure. That’s where I’m working now, trying to create an immersive environment with the music, a feeling for people to latch on to.

TK: “Coke Beat” does that really well. It’s got an ambient, dreamy texture but then Buddy starts drumming and it kicks in to another direction.

HM: That’s a really good example. We make the album and you learn what’s successful. And “Coke Beat,” for me, was the biggest success. So that’s the sound I’m focusing on now. That song has such a feeling, it takes you somewhere right away, and then it elevates you. So those are my goals. Does it take you somewhere in an interesting or unexpected way? Is it transportive? That’s what we value as a band, that’s what’s new with Almost Endless – and its even different with our live shows now too. We want to take you on a trip.

TK: When I saw you at MilkBoy back in the fall, the first show where you were really loading the new material into the set – it was different, sure, but you still felt like yourselves.

LS: I think we still want to bring that energetic element that we’ve always brought to the shows while doing justice to the new material. These songs, they’re a little harder to play live because they’re more complex. We can’t put the amount of craziness we used to put into our shows because we’re not running around hitting floor toms anymore. But we don’t want to be a band that’s up there staring at our shoes either.

LS: We want to stand out as an energetic band, because that is something we’re known for.

JS: That and we just feel the music when we’re onstage, and you can’t help it. If the music’s good, you gotta dance.

Almost Endless is the featured album in this edition of Unlocked; hear the spotlighted song “Street Burn” in Monday’s post, read Tuesday’s album review; see the video for “Coke Beat” in yesterday’s post and check back tomorrow for a collection of The National Rifle-themed animated GIFs. Seriously.