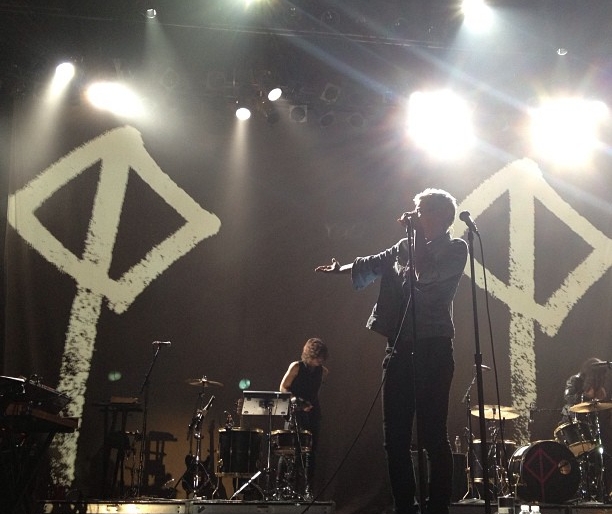 That’s a challenging sentence to finish.  The latest Cat Power album, Sun, incorporates elements of pop, jazz, grunge rock and even rap.  At the Electric Factory last night, her live show wove in as many influences, and then some. For starters, you heard right; Cat Power has a blonde pixie cut.  She has a backing band that looks like the group of kids who smoked cigarettes in high school in the 80’s.  She walked out to “New God Flow” by Kanye West and Pusha T.  She played mostly from her new album and had a video for almost every track.  Each visual was distinct from the one before it.  Clearly, a considerable amount of thought went into how the show would look, sound, and even feel emotionally.  As for the train of thought that determined the show’s aesthetic – or Cat Power’s, for that matter – it was hard to follow.

The concert began traditionally enough.  The band began an aching, drawn out rendition of “The Greatest.”  Marshall came out as the song began to build.  By the time the song was over, a rock concert had started.  Predictably, “Cherokee” was her next song – and so began a slew of visuals, some of which made more sense than others.  A video of clouds moving across the sky complemented lyrical references to the sky in “Cherokee.”  “Manhattan” had a gritty video tribute to the New York skyline.  The videos took an interpretative turn as the night went on.  “Always on My Own” was accompanied by a sketch of a Gorilla which changed colors.  “Peace and Love” had a tie dye montage during which the cryptic message “occupower” would flash across the screen occasionally.  Her most provocative video choice, though, was a slide show which ran during her performance of “Human Being.”  Five songs into the set, the audience was faced with faces of children, elderly men and women, families and, occasionally, the infirm.  Presumably, the message was to reach out to people in need, but there was no acknowledgement of who the people were, where they were from or who captured the images.  Instead of a heroic gesture, the use of these images seemed like a cliche.

The “Human Being” video is an extreme example of the attitude that prevailed throughout the night.  Since becoming famous and traveling the world (an entire verse of “Ruin” is devoted to listing new places that Marshall has seen), Cat Power stopped making the sort of ruminative music that made her famous in the first place.  She shouldn’t be slammed for an artistic progression toward pop, but her attitude towards her own art last night seemed dissociated from the artist she used to be.  The set had a few emotional moments (most notably during “Bully,” which produced tears), but it felt like a rock concert overall.  With her look, video reel and new sound, the show was all spectacle.  At the end, she thanked the crowd as “New God Flow” proclaimed delusions of grandeur.  Her exit music choice did not seem to be a tongue-in-cheek or ironic statement on her own success.  The sum total of Cat Power’s changes amounted more to camp than anything else.

That said, Chan Marshall writes incredible music.  Her new album is catchy.  It is packed with variations of experimental pop.  Not every song on the album is the caliber of “Cherokee,” but very few are forgettable.  The Cat Power live show gave Chan an opportunity to tweak the sound of her material, which worked out.  The subtle complaint rock undertones of her older and newer material became obvious.  Cat Power’s live show made her wide-ranging discography cohesive.  Her current hubris may be questionable, and some of her video choices can be scrutinized, but Cat Power is unquestionably a talented artist.  Fame changed her, it seems, but her live show suggests that the old Cat Power and the new Cat Power are two sides of the same coin.

Setlist
The Greatest
Cherokee
Silent Machine
Manhattan
Human Being
King Rides By
Sun
Bully
Angelitos Negros
Always on My Own
3,6,9
Nothing But Time
I Don’t Blame You
Peace and Love
Ruin