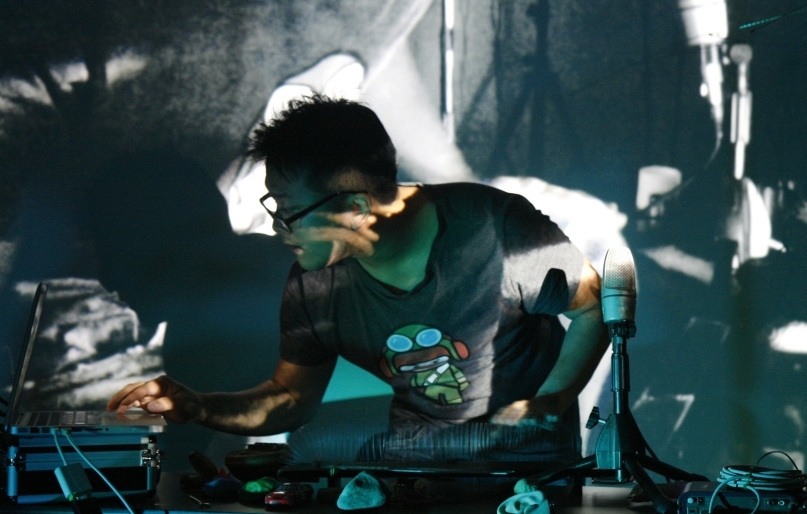 Last Tuesday morning, the musician Joo Won Park was standing on the JFK Boulevard Bridge holding a small recording device near a flock of seagulls in order to capture the sounds they were making. “You have to be very quiet and very patient,” he said softly, trying not to startle the birds. “When I am making a field recording, I have one rule: I always wait until I think I have captured the best sound of the day, and then I keep recording for five more minutes. The best sound always happens after you think you already have it.”

Park, 33, grew up in Korea. He earned his bachelor’s degree at the Berklee College of Music, in Boston, and his doctorate from the University of Florida. He has lived in Philadelphia since 2008, and is currently an assistant professor in the music department at the Community College of Philadelphia. He also composes, records and performs using a computer, toy instruments and field recordings.

Park kindly shared with us the piece he made using his field recording from last week’s meeting at the 30th Street Station (stream it below). About the finished piece, he said: “The first part is a collage of field recordings I made that day. The ‘outside’ sounds (hail, seagulls) and ‘inside’ sounds (train station, resonance of the metal poles of the bridge) are mixed into one soundscape. As the piece progresses, the sounds become more unnatural: the hail sound turns into a hectic melody, the voice becomes incomprehensible echo, and the pole sound with larger-than-life reverb signals the end of the piece.”

Though Park mostly works as a solo artist, on Saturday night, he performs in a duo at Studio 34 with Julius Masri (Superlith, et al.). Before we went out on the bridge to chase seagulls, Park and I walked around the train station and talked about his music and the importance of listening closely to what’s happening around us.

The Key: What does computer music mean to you?

Joo Won Park: I think of it as trying to do something that’s unique with the computer, rather than imitating human performance. I try to make music that a computer can do better than a human, or that is too bothersome for a human to make. And I’m interested in creating a duo between the computer and me. A lot of times, I don’t know what the computer will spit out. When I make music on the stage, there is no pre-recorded sound. What I play goes straight to the computer, and the computer processes and changes what I play. The process the computer goes through is intentionally made so that the outcome is different every time.

TK: How exactly does your live performance practice work?

JWP: I have a program called SuperCollider that allows me to customize a lot of computer effects and processes using a text-based language. The ingredients and programs are prepared, but the combination is different depending on who I’m playing with, or what sort of instruments I bring on stage, and how the effects combine at the time. On stage, I try not to stare at the computer—a lot of performers do that. I’m not clicking the mouse or staring at the computer. I’m playing instruments, and those sounds are processed. The sound is fed through various microphones, it goes into the computer, and the sound of my objects is then processed. It’s like an extension of the sound. If you think of a word processor, it’s the extension of your arms or fingers. The computer part extends the sound that I’m creating on the stage. It extends the sound of an instrument.

TK: Why do you use toy instruments?

JWP: They’re easy to carry around. It’s impossible to carry a piano around, but I have a little xylophone I can bring with me. I also have a 3-year-old son, and when you have to take care of a child, a lot of sound inspiration comes from them. I like melodica a lot. I have a kalimba and a kazoo, too. Lots of small things. I like the idea of holding a small instrument because it’s very personal. I like to bring that intimacy—that personal experience—to the stage. It’s also sort of nostalgic. When I grew up in Korea, I remember 60 kids in a room playing a recorder. It was a very harsh sound, and I still like that harsh sound. I like recreating that memory.

TK: How do field recordings fit into your work?

JWP: When you record something, or listen to something while having the intention of recording it, you hear things differently. All of the sounds we hear right now, are actually a disturbance to our interview. But if you stopped to hear these sounds as a source to record, you would start to hear something else. You’d hear the room resonating, and you focus on these people walking, and at a certain point you find something musical about it. My job is to find these moments, and to archive these musical moments that happen in life. Recording for me is like playing scales. If you want to be a good guitarist you have to play your scales. As an electronic musician, I think field recordings are one of those things I have to do to stay in shape. And it’s a great opportunity for me to stop and listen to the world. It’s also a great way to get original sounds. You can’t get the sound of train station from a sound library, but the sounds we’re hearing right now are unique to us. I could use them for my composition. And I can bring out something more personal from the sound.

TK: How often do you make field recordings?

JWP: I record things a lot. I carry my recorder everywhere I go. Moments are always happening and I don’t want to forget them. It’s like taking a picture. For example, I recorded my son’s voice from the day he was born until his first words. I recorded as much as I could a few times a week. I got all the recordings and made a 90-minute piece out of it. The result is a baby’s voice gradually becoming speech. You can hear the changes in his tones and voice and his intelligence. It’s very interesting, and much different than making a photo or video. There are certain sounds that are very personal to me; if I don’t have a recorder, it’s just in my memory. Sometimes I take archived sounds out to refresh myself of a memory. One day I will maybe play my son this recording on his wedding day to embarrass him.

TK: What will your performance with Julius be like?

JWP: When we were rehearsing, we both just brought a bunch of stuff we can make sounds with. We had tables with objects on them. We just started making sounds, and it ended up being sort of us challenging each other. He would toss me a chain, or something, and tell me to make a sound out of it. It was like a friendly dojo battle. It’s nice to have a friendly battle like that. I respect him a lot as a musician, and the sound he makes intrigues me. Sometimes when you play, you get into a zone, and you don’t realize that time is passing. We will hopefully create a moment like that. We promised each other that we would surprise each other.

TK: And do you hope to surprise the audience, too?

JWP: After they come to our show, I want the audience to find something unusual and new in the sounds they hear everyday. Perhaps if the audience sees me making music with my coat—by rubbing my coat against something—perhaps they will hear the sound of their coat differently. Everyday sounds can become beautiful music to you. If we pay more attention to these mundane things, then I think the world becomes much more interesting.