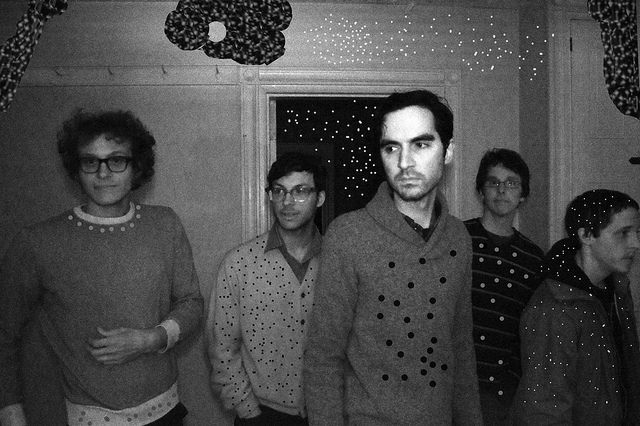 The Spinto Band’s new Cool Cocoon is a raucous good time – not unlike their live show. The Wilmington, Delaware natives have long been veterans of the Philadelphia local music scene, and we’re excited to welcome them back this weekend for a show at Johnny Brenda’s. They come fresh off of an international tour, touting Cool Cocoon, which dropped on February 5th. The new album, the music video for the single “What I Love,” and the band’s intense activity lately have sparked positive coverage all over the world, from The New Yorker to international fan tweets. We wanted to know how all of this attention made the guys feel, so we caught up with The Spinto Band’s Nick Krill and Thomas Hughes over e-mail while they were touring Europe.

The Key: Your new music video has been hailed as “charming” and “joyful.” How did the video come about?

Nick Krill: This video came about after Albert Birney went to the local library bought a used instructional gymnast book that had pictures for every step of each maneuver. We started scanning these pictures, not really sure what we would do with them. Eventually we had the idea to compare and contrast her gymnastic routine with someone’s breakfast routine. Albert and I ended up making the video over the course of about a week.

TK: How has your experience been touring the new album? Any favorites to play live? Is there one song from your whole discography that is, across the board, everyone’s favorite to play?

NK: Well, we haven’t toured much on this album yet, but we are about to go out on a little east coast tour next week. We just got back fro a few dates in France to promote the album, and the best show was in Toulouse. The crowd was fantastic, and the venue (Connection Cafe) was outstanding. Hmm, in terms of our favorite song to play…it seems that our favorite to play is always the newest song we’ve just learned.

TK: You’ve been all over the world and just returned this week from a tour in France. What’s it like to come back to the local scene and play here? How has your touring style and experience changed over the years?

NK: it is great to come home to our local music community.  Our home town region has such a great community of musicians and clubs and radio stations that it is really an amazing place to come home to.  Hmm, I dunno, our tour style seems to stay pretty consistent…. Just a bunch of smelly dudes in a van.

TK: You’re playing at Johnny Brenda’s this Saturday night. What’s your favorite venue to play when you’re in the area? Is there a particular place that, when first you played there, established that you had achieved a certain level of success?

NK: We love playing Johnny Brenda’s.  That venue is fantastic.  We also love Mojo Main down in Delaware (the old East End Cafe).  I think my best local venue memory is when we were first offered a concert at the Khyber years and years ago… I remember being really excited that we were finally going to play in Philadelphia.

TK: How did the recent New Yorker coverage make you guys feel? They loved your new single.

NK: It made us feel great! My mom has had a subscription to the New Yorker as long as I can remember… She’d always read it around the house when I was growing up…so it was great to forward her that review.

TK: From singles like “Oh Mandy” “Summer Grof” and “Jackhammer” (from the Slim & Slender EP) to your recent single “What I Love” and it’s cheerful music video, you have developed a reputation for creating generally upbeat music, even when your lyrics take on darker content. Reviews of your music use phrases like “pure bliss,” “playful” even “goofy.” What does it mean to you that you create “happy” music? Does The Spinto Band’s established sound ever act as a constraint to writing a different kind of music?

Thomas Hughes: I never think of our music as strictly “happy” because as you mentioned, much of its lyrical content can be quite melancholy. Perhaps we’re just more attracted to major keys than minor ones? As a band we’ve always been interested in making concise, ornamented pop music. I don’t feel any writing constraints unless maybe I wanted I wanted to make a brooding, humorless dirge.

TK: How has your music writing style changed over the years? You guys formed in 1995 as high schoolers, right? And there’s an urban legend that your inspiration back then came from lyrics that Krill’s grandfather (Roy Spinto, hence the name) wrote onto the back of a box of cracker jacks. Do you feel that you are still the same band that came together all those years ago?

TH: We’ve gone through many changes in our musical development. When we first started making music we never spent more than two hours writing and recording a song. Then we started to realize that songs could be written before they’re recorded. Then we filled up the songs with as many chords and melodic lines as possible. And recently we’ve come full circle trying to integrate the spontaneity of our early 4-track recordings into the writing process. Every step has been equally exciting.

TK: We recently ran a piece on you guys which had a ridiculously long headline due to the sheer amount of activity you have been up to lately– you had dropped a new track, announced an album sale, planned a show at JB’s, and just received that New Yorker shout out. Is it hard to balance band activity with your lives outside of the band?

TH: It can be at times. Luckily, we have five people in the group and everyone seems to have certain skill-sets that help with the division of labor.

TK: You guys seem to be very media savvy. Your Twitter feed is blowing up with sharp, complimentary fan re-tweets, you tweet for yourselves, you Instagram, you Facebook… Has social media changed the way you promote yourselves since you first started as a band? Do you feel more connected to your international fans now than you used to?

TH: The internet has always been a big part of our band, down to the first AOL-hosted Spinto Band site I made using some awful templates I had available when I was in high school. There was a picture of Bob Saget on the front page because we didn’t have any pictures of ourselves. It has always seemed like an essential part of our being so we’ve seemed to co-evolve with the technology I guess.

TK: Finally, what’s next for The Spinto Band? You have east coast and international shows scheduled through March. What will the spring bring for you guys?

TH: At the present time, we have a few shows and some festivals. Our recording studio is going to bulldozed so we should probably figure out something to do with all of the free coaches and pianos we’ve been collecting through the years.