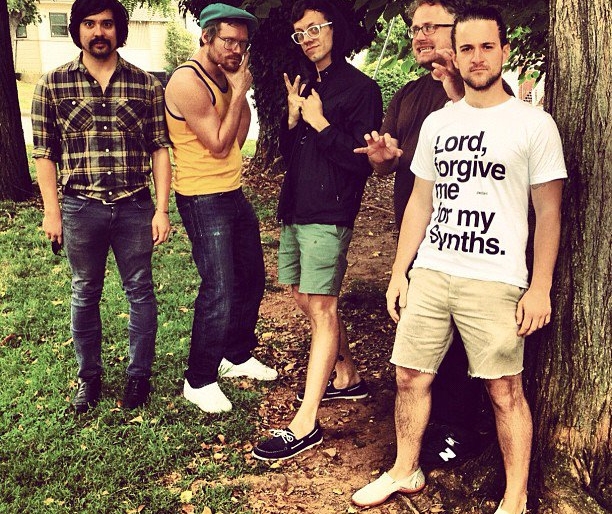 Interview: Man Man’s Ryan Kattner on faking death, tea, and what fans can expect from Man Man live, this Saturday at Union Transfer

In many ways, you could argue, Philadelphia’s Man Man are like the zany heart of the local scene. Throughout the years, we’ve watched them grow: from a ramshackle league of whooping, circus gypsies—to the nuanced and creative band who released 2011’s Life Fantastic. And during this time, the band never failed to disappoint, regaling us with some of the most fun, colorful and memorable shows we’ve seen, and a sense of humor and energy that’s contagious.

Now, the band is getting ready to release its fifth record this summer, which features new Man Man members (Man Men?) Shono Murphy and Adam “Brown Sugar” Schatz, along with vets Ryan Kattner and Chris Powell. But first, they’re completing a month-long tour, which they’ll celebrate with an epic closing show this Saturday at Union Transfer. We caught up with front man Kattner (aka “Honus Honus”) ahead of time—to talk faking death, tea, and what fans can expect when Man Man rolls into town.

The Key: So, you guys have a new record coming out this summer, which you describe as a natural progression from Life Fantastic. Will we get to hear these songs live at Union Transfer?

Ryan Kattner: Yeah! Part of this tour was being able to take these new ditties and road-test them and see how they do.

TK: What has the response been like so far?

RK: It’s been awesome! They’re definitely different [from older material.] But they feel like this band. We’re forever gonna be anchored by my rusty throat (laughs).

TK: If you could describe the new record in one sentence or less, how would you describe it?

TK: Well you have certainly piqued my interest! (Laughs.) So we all know that Man Man is known for being crazy and wacky on stage—but how do you prepare for a show behind the scenes? Are there any band traditions or rituals you like to partake in?

RK: We do nice, soothing, rosemary-huffing sessions—that’s boiled water with rosemary leaves and a towel over the head. We actually planned on doing this for the whole tour—but then we did it for one show and we realized that the rosemary had gone bad. So we were huffing bad rosemary!

TK: That sounds terrible!  Do you need a special type of rosemary for huffing purposes, or is the regular grocery store type sufficient?

RK: Only organic rosemary. Or the stuff that grows off the side of a highway (laughs). I’ve never been a huge tea drinker, but we’ve been battling a flu epidemic this tour, so my composition now is like 1/3 green tea, and 1/3 broken glass (laughs.)

Actually, in a strange, messed-up way, it is fun. Well…perhaps not fun—but at least interesting—to begin a tour sick. Because then by the end, you feel like the phoenix rising. So that’s why we’re very psyched for this last week of shows—because we’ve hustled through it, and now it’s our triumphant return.

TK: I must admit I’m surprised to hear Man Man are tea-drinkers. I expected you to tell me you all do shots and cartwheels.

RK: (laughs). Well, the rosemary tea is puffed out of the gutted-out gully of a pig. And you know… whiskey is part of our DNA. But we don’t have to tell kids that. 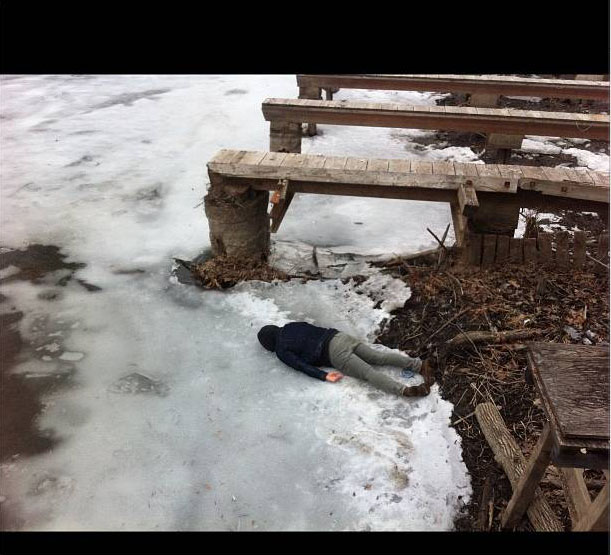 TK: So…we’ve been following you on Instagram, and we must admit: we’re a little concerned about all your near-death experiences/ resurrections from the dead. Where did you come up with the idea for the dead guy meme? Is this a hint towards the new record’s theme?

RK: It’s just something I’ve been doing it for years. It doesn’t relate directly to anything in particular. The new record is not about aliens and me dying. (pauses) I’m sure there are about 10 stoners out there who will be really sad to hear that. (laughs) Really, it’s just us finding some levity on tour—especially in the winter, doing the same thing every day, it can feel a little like [Bill Murray’s classic flick] Groundhog Day. It’s just a way to blow off steam. Also, I’m all about dying. And the Man Man detractors—if they can get a smile from seeing a picture of me dead—well, that just brings an ET-like glow to my chest.

TK: Aww, how sweet. So Philly is the last night on this tour. What are you looking forward to most about coming home?

RK: Well, we love playing Union Transfer, so we’re definitely psyched about that. I’m glad the tour can end in Philly instead of starting here. We have new players in the band, and this is their maiden voyage with us. So we’re happy that we were able to work out any kinks on the road and get used to playing together, and then share this new band with Philly. Mostly though, we just want kids to come out to our show. Not just to see the new material either—for this tour, we’re digging out songs we haven’t played in years. There will be stuff that spans all of our records. It’s refreshing. We’re really excited about it.

TK: We’re really excited too!  So besides the show, what’s coming up next for you?

RK:  So we have the new record coming up—which Chris [Powell] and I mixed with [famed producer Mike] Mogis in Omaha. It’s actually been kind of hellaciously hectic and not ideal—we had to mix the record while we were on the road. It was definitely not easy, but it helped that we worked with someone as brilliant as Mogis—we knew we could trust him to make sure it worked. But it is really tough to listen to the mixes when you’re in a tour van, or at a rock club, and have to make that call. But now it’s mixed, so we just have to sequence it, and get the art work squared away.  I’m really excited hearing the record, just knowing where my head was at when we recorded, and where my heart was at. There are some really beautiful songs on this record. I’m excited to unleash it on the world.

Man Man play Union Transfer, 1026 Spring Garden Street, Saturday, March 2 with Murder by Death and Northern Arms. The all-ages show begins at 8 p.m. and admission is $20; more information can be found at the venue’s website.